Network tied arches are tied arch bridges with inclined hangers where hangers intersect other hangers at least twice. Network tied arch as a concept was developed by Dr. Per Tveit. The world’s most slender arch bridge, The Brandanger Bridge, situated in the western part of Norway, was designed by Dr. Per Tveit and was opened in 2010 (Fig 1). Before this, bridges with inclined hangers were made popular by Nielsen – Lohse (Fig 2). However, these bridges had a drawback in the case of dynamic loads. Under dynamic load, the tension in inclined hangers is reduced, leading to compression in some hangers. The network tied arch developed by Dr. Tveit with multiple crossing of hangers avoided this issue.

The compression in the hangers can be avoided by increasing the distance between the nodal points. However, increasing the distance will increase the bending moment in the chords, thus reducing the buckling capacity of the arch. Between the hangers, the arch tends to move up, and the tie tends to move down. An extra set of hangers will reduce the buckling length in the arch and tie, resulting in less bending in the arch. This effect is even more significant if we put three sets of hangers (Fig 3). We arrive at network tied arch geometry with some of the hangers intersecting at least two other hangers with this arrangement.

The network arch is analogous to a simply supported beam with chords as tensile and compressive flanges and hangers as webs. Most of the shear force is transferred to support the vertical component of forces in the arch. Much of the variation in shear force is taken by variation in hanger force. The hanger distributes the forces to the chords, leading to very little bending and predominantly axial load. The stiffness of the network arch bridge is hugely affected by hanger arrangement. Hanger arrangement includes the number, position, and inclination of the hangers. This has considerable influence on the distribution of internal forces. Usually, hangers are placed with equal spacing along the upper chord, resulting in a simplified construction process, uniform buckling length, and a smaller bending moment along the arch. A few of the common hanger configurations are mentioned below:

Constant Slope Configuration: This is the most common method of network hanger arrangement. In Japan, almost every network arch bridge has this arrangement.

Variable Slope Configuration: In this case, the slope of the hanger varies following a function. A general case is illustrated below.

Advanced Hanger Configuration: When subjected to UDL, the forces in the hanger are minimized when they are in a radial direction like in a ‘spoked wheel.’ Below shown (Fig 6) is a modified version of the ‘spoked wheel’ model. For such arrangements, if forces in each hanger are approximately equal, the resulting forces will lie on the radii of the arch circle.

Figure 7. Configuration of the bridge

For live loads, a single lane of LM 71, rail traffic load as per Eurocode is considered on the bridge.

In conventional arch bridges, all the hangers are vertical, and they are less in number than the network arch bridge. But for the sake of comparison, we will consider the same number of hangers for both configurations. The results of the following two cases will be checked:

The decisive force for an arch bridge is axial load and bending moment (in arch and tie). Axial load is the function of the span of the bridge and arch rise. As they are the same for both the bridges, axial loads are also similar. However, the longitudinal moment shows the critical difference in the load-carrying pattern of both the bridges.

Figure 8. Bending moment in hanger and tie due to LC 1

For LC 2, LM 71 live load vehicle on a single track is considered. Fig. 9 and 10 show the maximum bending moment in tie and arch due to LC 2 and the critical position of the vehicle causing this bending moment for both types of arch bridges. Like LC 1 case, the load is predominantly carried by arches and tie beams for conventional arch bridges. However, in the case of network arch bridges, the load sharing is even, and the cross girders connecting the tie beams carry a significant amount of load. Therefore, network arch bridge decks are designed for transverse bending rather than longitudinal bending. For LC 2, the bending moment ratio between the network arch and the conventional arch is 1:7.5 for arch and 1:4 for tie beams.

Anuj is currently working with MIDAS IT as a Senior Structural/Bridge engineer. He has over 4 years of experience in the design and review of bridge/building projects. He has performed rail-structure interaction for various major railway bridges in India. He pursued his Master's Degree from IIT Madras and is experienced in handling complex technical issues related to bridge engineering projects. 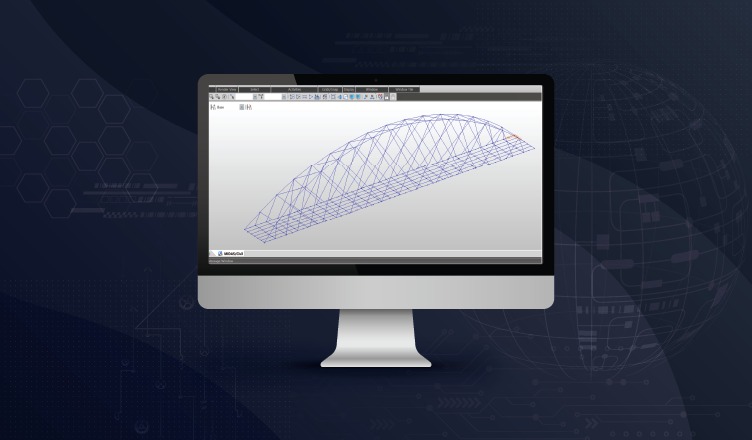