Currently, Prestressed Concrete Beam Bridge, which is generally applied as the most economical bridge type for small and medium-sized bridges in construction works such as highways and national highways, has been introduced to the entire bridge construction field for almost 60 years after the technical proposal.

In this post, we will look at the initial development story and trends of the Prestressed Concrete girder.

In 1956, the Bureau of Public Roads (now FHWA), AASHO (now AASHTO), and the Precast/Prestressed Concrete Institute (PCI) worked together to develop and present four standard sections of AASHTO Type I, II, III, and IV as an initial PSC I girder, the construction of PSC I girder bridges began to become common in Italy and other European countries from the 1960s.

In 1965, AASHTO Type V and VI, which expanded the width of the upper flange through additional research, were proposed.

The AASHTO girder is characterized by pre-tensioning as the method of introducing pre-stressing. The below table shows the cross-sectional specifications and maximum span length of AASHTO Type III, V, and VI girders. The maximum span length of the girder shown in the table is the result of applying HS25 load (similar to DB-24 load) and concrete compressive strength of 48MPa based on the short-span bridge. 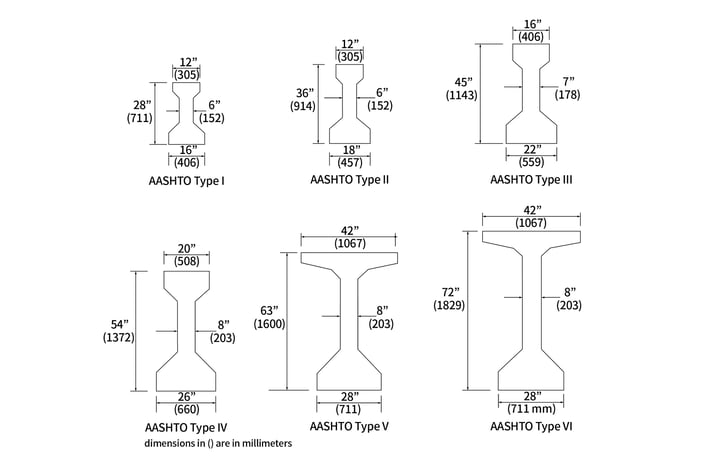 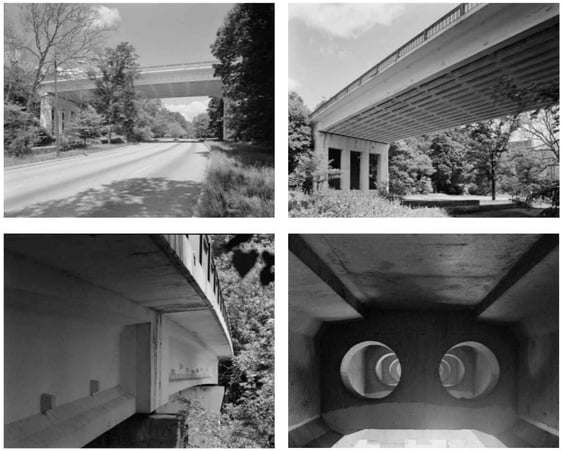 The evolution of PSC girders in USA

In the meantime, several states in the United States have developed and used their own standard sections by making efforts to develop girders that are better suited to local characteristics or are more efficient. In the late 1970s, FHWA conducted a study comparing the standard cross-sections of several states including AASHTO standard section in the United States, and as a result of finding that the efficiency of the Florida and Washington bulb-T girder was excellent, the AASHTO/PCI bulb-T cross-section was proposed in 1988, which improved the existing AASHTO cross-section. The height of Bulb Tee girder is 1,372 mm ～ 1,828 mm, and the maximum span length is 43.8 m similar to AASHTO girder Type V.

Since then, several states have used this cross-section along with the existing cross-section, and efforts have been made to develop standard-type PSC girder bridges such as developing and applying the bulb-T cross-section focusing on the extended span and the lower girder depth in Florida, Nebraska, and New England.

In 1992, the University of Nebraska in the United States developed the long span NU(Nebraska University) Girder.

The NU girder shown in the figure below has a cross-sectional shape that is almost similar to the upper flange of the Bulb Tee girder by increasing the width of the lower flange compared to the AASHTO girder.

In the figure, the cross-section of the NU2000 and NU2000PT girders (girder height: 2,000 mm) is shown, “PT” in the name means the cross-section which has the widened web in order to apply post-tension. This has the advantage of being able to more effectively resist the compressive force when the negative moment acts, and the lower flange cross-sectional area can be increased so that a large number of tendons can be placed.

In addition, the NU girder has the advantage of having excellent aesthetics by treating the flange and the hunch portion with a curve, and in this regard, it is described in comparison with the 'Super girder' below. 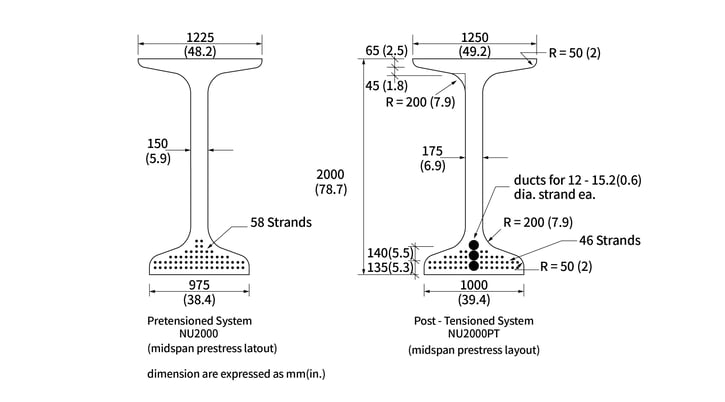 Due to the 20% increase in the diameter of the strand, the compressive force can be increased by 40%.

Another characteristic in the manufacture of NU girders is the application of the WWF (Welded Wire Fabric) rebar, not the on-site assembled deformed rebar. The WWF rebar shown in the figure below is up to two times more expensive than the deformed rebar, but it is more economical considering the labor and inspection costs required for on-site assembly and reduction of working time. The quality of rebar assembly is excellent, so it works positively in terms of girder quality control. 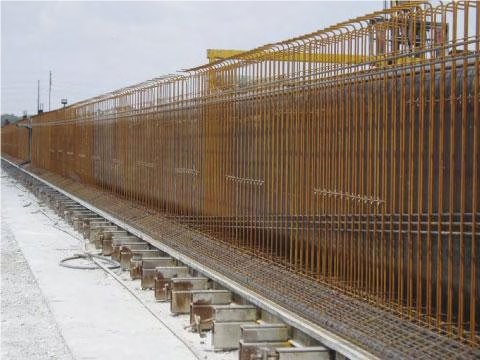 The Bow River Bridge in Alberta, Canada, shown in the figure below, was constructed as lanes on either side in 2002. The length of the girder applied to the construction of the Bow River bridge is 64 m, the longest precast PSC type I girder ever built in North America. A 2800 NU girder with a height of 2,800 mm was used, and each girder weighed 130 tons.

In 1998, DOT(Department of Transportation), Washington, USA, developed a long span “Super girder” with a cross-sectional shape similar to that of NU girder. As compared in the figure below, the cross-sectional shape of the Super girder is very similar to that of the NU girder, but the difference is that the flange edge and the haunch part are not curved. 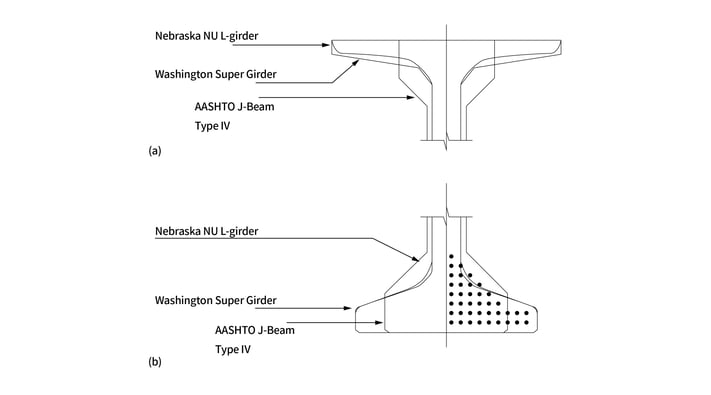 WSDOT’s prestressed I-girders are among the most efficient sections used in the industry. The research of WSDOT compares the structural efficiency of their standard pre-tensioned I-girders with girders used by the NU girder, which formed the basis for the WSDOT “Super girder” series. On average, the girders with the wider flanges which is a different characteristic of “Super girder” compare to NU girders, provide 20 percent more span capability than the standards at the time.

Super girders made with a girder height of 2,400 mm have a track record of being constructed as a short-span bridge (span length 60 m) in Washington State.

In recent years, according to changes in the social and technological environment, the expansion of the span length along with securing the clearance by reducing the height of the girder is continuously required. In the case of river bridges, it is necessary to secure water passage due to the increase of the design flood volume, and in the case of the overpass, the demand for 40m-class bridges is constantly increasing as the width of new or extended roads is planned to be 30m or more.

However, in the case of designing a PSC I-girder bridge for a bridge with such a span, the competitiveness in terms of construction cost can be maintained, but there are issues such as the problem of overcoming the limitation of clearance and aesthetic due to the rapidly increased bridge height. Since steel bridges and PSC box-girder bridges, which are evaluated as alternatives to this, have a major weakness in economic feasibility, attempts to lower the height of PSC I-girders have continued until recently. Not only the United States but also many other countries are attempting to develop several more advanced PSC I-girders and use them in actual construction.

It will be the driving force that leads the technology of the construction industry when engineers who should consider the price aspect, as well as the safety of people, are interested in these various construction methods and materials.