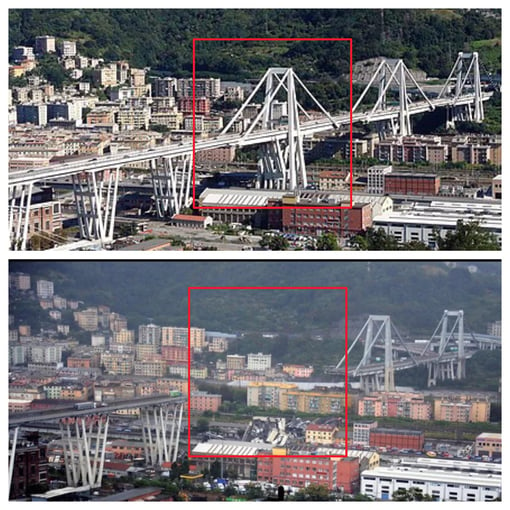 Fig. Before and After photos of the Morandi Bridge

The Morandi bridge (Officially: Viadotto Polcevera) was an architectural and engineering landmark since its construction. This cable-stayed bridge was characterised by a prestressed concrete structure for the piers, pylons and deck, very few stays, as few as two per span, and a hybrid system for the stays constructed from steel cables with prestressed concrete shells poured on. Specifications of the structure are: 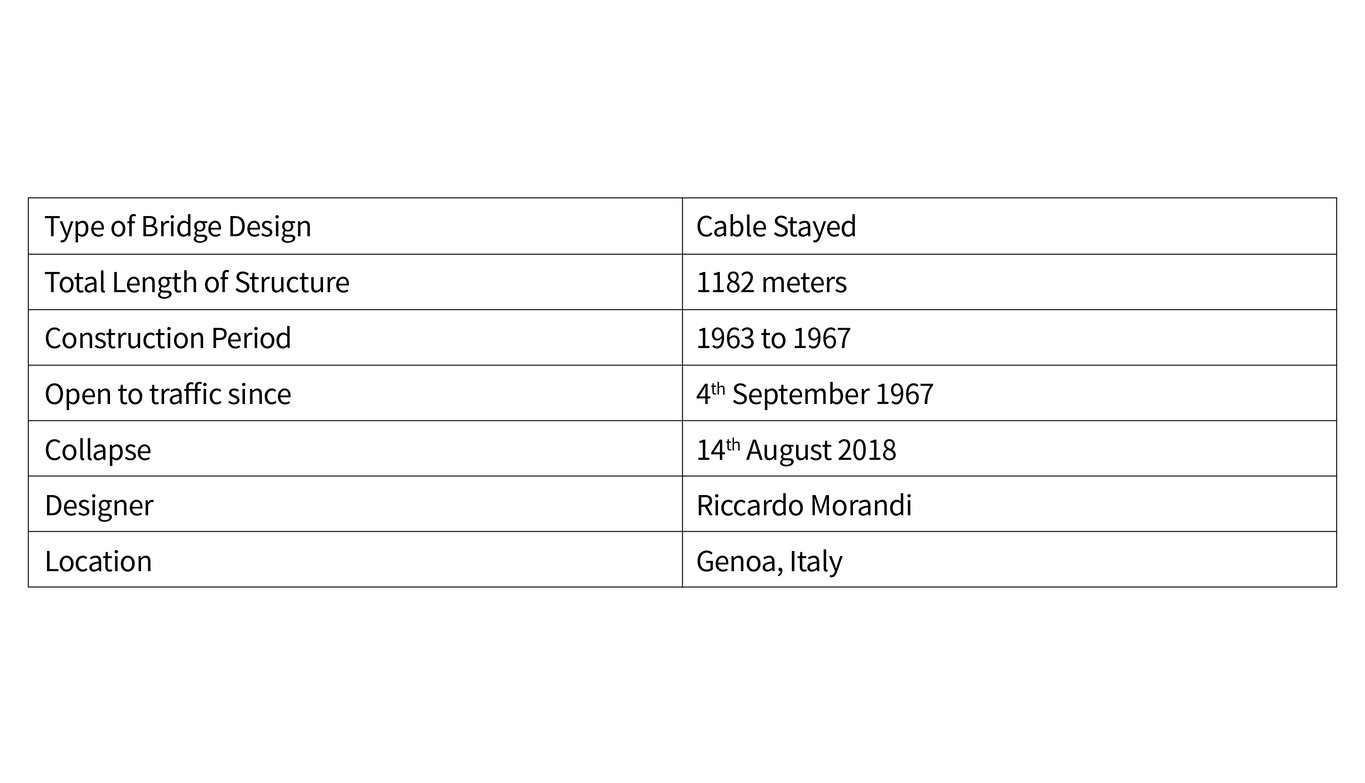 A cable-stayed bridge can be defined as a bridge, in which the deck is supported by tensioned cables connected to a pylon. Most of the modern cable-stayed bridges that we see today have multiple cables usually forming a fan-like shape or parallel lines between the bridge deck & pylon, unlike the Morandi bridge.

For the construction of the Morandi bridge, temporary stressing was done above the surface of the bridge deck, while in modern cable-stayed bridges, multiple stays are used to support the progressive deck construction. The temporary cables are obviously removed in case of a Morandi bridge-like construction process, while the stays of the modern bridges are usually permanent. The concept of single concrete stays didn’t get much traction in the following decades. 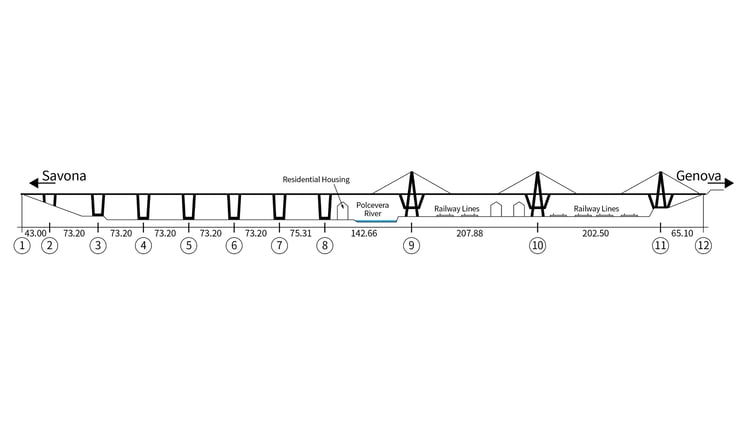 Fig. Schematic of the piers and distances between each support of the Morandi Bridge

When this bridge was constructed, the prestressed concrete technology could be said to be in its infancy and problems related to creep, temperature variation, relaxation loss and non-linearity in structural response were considered intuitively and were occasionally, completely neglected.

The Morandi Pre-compression System for cable-stays

Morandi had developed and patented a pre-compression system that was specifically used in this bridge. In all cases, the strands were coupled in groups of four and the ducts were supposed to be grouted with the usual injection of cement mortar. 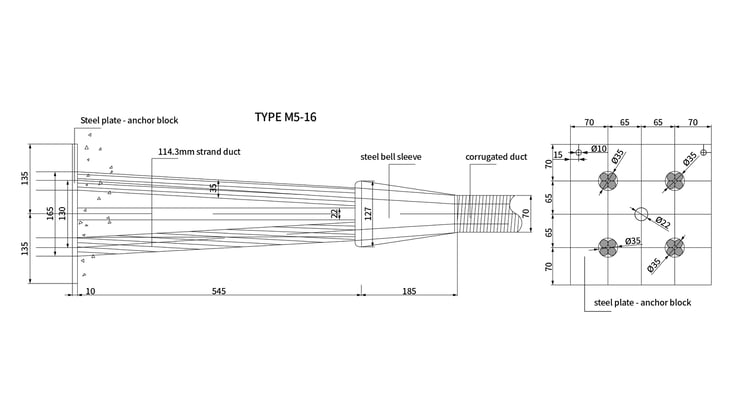 Fig. Details of the end part of a 16 ½ inch strands post-tensioning cable according to the Morandi System,
re-drawn (Units: mm)

Comparing the above shown Morandi M5 system to the modern practice, it is striking how tight the strands were located inside the duct. In modern practice, the void section is around 50% larger than in the Morandi case. Moreover, the injecting material available today is far more fluid than those available in the 1960s. It could thus be concluded that the ducts used in the case of the Morandi bridge were essentially impossible to be injected and the same was proven based on descriptions and photos reproduced in the report of the Commission of the Ministry of Infrastructure and Transportation. So, the behavior of the strands was quite different from the one that was expected in terms of corrosion protection, effects of fatigue, structural stiffness, and localized sectional response.

In the case of bonded tendons, concrete contributed to resisting tension to an extent and even when cracked, tension stiffening would contribute to reduced cable elongation. However, when the tendon isn’t bonded, concrete will not assist in resisting tensile force and the stiffness would be due to the tendons alone.

In the early 1990s during the inspection, it was noted that the stays of the 3 balanced system were suffering from wide spread general deterioration and several instance of concentrated degradation. Maintenance work was carried out on pier 11 and 10 over the years after this. Reports between 2011-2015 stated that there was a loss in post-tensioning such that few of the strands were free to move. However, no major intervention was scheduled for pier 9 and reports stated that stays were in better condition due to limited corrosion. On 14th August 2018, Pier 9 collapsed during a storm.

The position of the debris seems to indicate that the southwest side of the stay should have been released first. With this as the trigger, elastic analysis was performed for the structure with construction stages, but without the time-dependent effects. From that, it was concluded that a stay removal will induce a bending moment in the plane of the deck and torque that will be above the capacity of the structure.

Judging that structure from the knowledge we have today, we can say that it had several issues like lack of redundancy in the structure, improper time-dependent behavior consideration, and lack of insight that made inspecting and maintaining the stays very inconvenient. No doubt though, the structure was a masterpiece for the time that it was made in and structurally sound based on the knowledge of the time.

Morandi bridge was designed to carry the loads acting on it even today by quite a safe margin. However, it still collapsed majorly owing to a lack of maintenance/intervention at the right time. No doubt, it's easier said than done for that time. However, with such advancement in technology, real-time monitoring of any structure could be implemented if required. Relatively priceless sensors could be installed on the structure to send data to systems that can detect any minor deterioration with high accuracy.

Globally, many landmark structures are quickly approaching the end of their life cycle. From 2000 itself, at least 125 bridges have collapsed. This showed that immediate action needs to be taken in the field of structural health monitoring, especially for infrastructure projects. 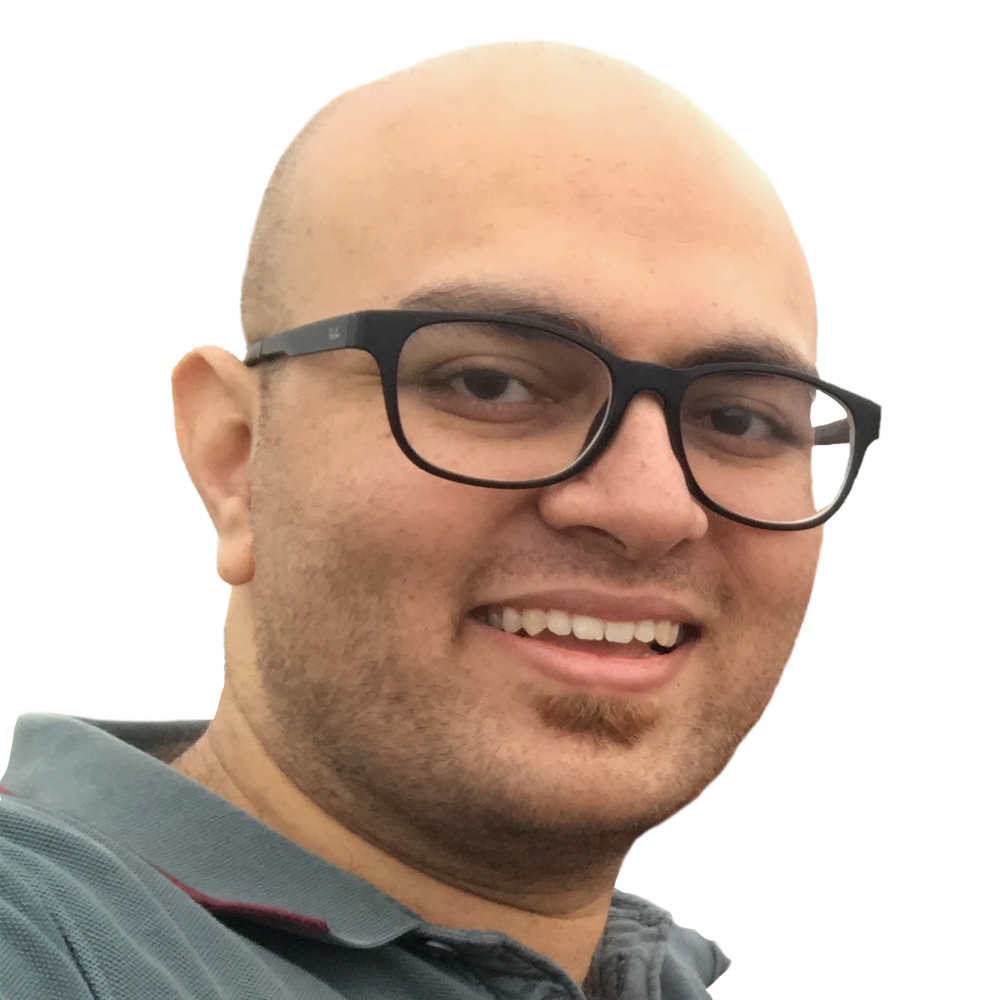 He has pursued his Masters in Structural Engineering from NIT Surat and has 8+ years of extensive Technical Reviewing and Consulting experience for Bridge & Building Projects. He enjoys being an integral part of complex bridge engineering projects and providing software related as well as technical suggestions to ensure timely completion of engineering works for such projects.