Composite Steel Integral Bridges are quite popular for highway bridges spanning between 30m to 45m and with skew less than 30 degrees. Structural steelwork provides a lighter and quicker construction with adequate structural capacity. Integral bridges have the additional benefits of good ride quality, increased durability, and robust structural behavior.

With all the benefits of integral bridges, there are design challenges especially when it comes to the interaction of the structure with geotechnics. This article will discuss an example of a composite steel integral bridge, covering the analysis and design concepts used for such bridges.

Key Point 1: How to decide on the various bridge parameters

The article discusses how the bridge geometry was decided, key construction parameters considered, and major determinants to selecting the foundation size and layout.

Key Point 2: What are the key loads to be considered in Integral Bridge Design

The webinar will discuss various scenarios of loading including the effect of thermal expansion and contraction in conjunction with earth pressure effects and different live load combinations acting on the bridge from the UK and Eurocode perspective.

The webinar will discuss how to efficiently set up the analysis model to reflect a grillage deck, soil-structure interaction in the piles, and how to use the automated capacity calculation tools in MIDAS.

What is an Integral Bridge?

Conventional bridges have the superstructure supported on the substructure via bearings. The abutment behaves separately from the main bridge and there are expansion joints that separate the bridge from the approach road/embankment. Conventional bridges, therefore, allow for free movements of the deck under thermal expansion and contraction. In an integral bridge, however, there are no expansion joints to accommodate enlargement due to temperature variations and the bridge span is monolithic to the abutments. The following figures demonstrate the difference between a conventional bridge and an integral bridge. 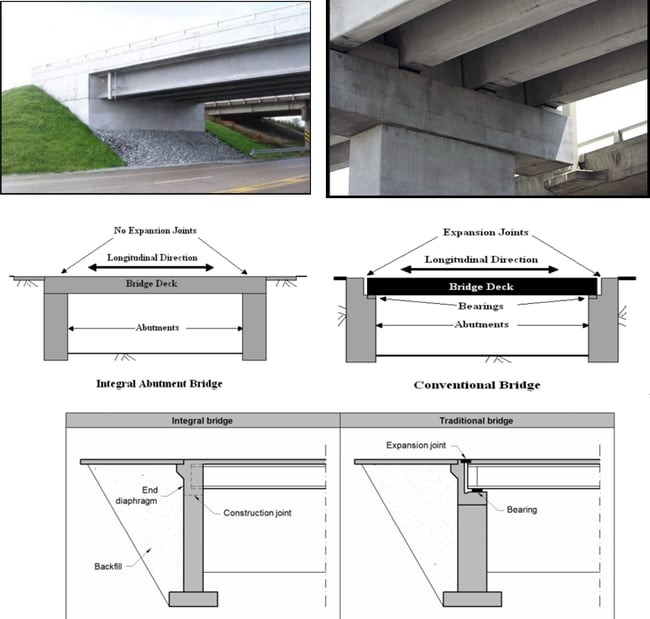 Integral bridges are more durable than conventional bridges because of the continuity in the structure. There is no chance of leakage of salts through deck joints to abutments and piers. Integral bridges require lesser maintenance and fewer inspection problems. Integral bridges offer better structural performance, better Ride Quality, and better seismic performance. DMRB Standard CD350 states to go for integral bridge for spans<60m and skew<30 degrees. 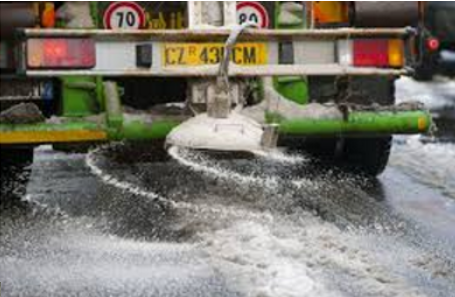 Typical expansion joint in decks and corrosion to bearing plates

Integral bridges are of various types depending on the type of substructure supporting them. PD6694-1 shows that integral bridges resist the thermal contraction and expansion either through translation only or a combination of translation and rotation of the abutment. There are Frame type abutments that resist thermal movements using both rotation and translation of the abutment. There are bank pad abutments that are rigid and do not allow much rotation. In some cases, the earth (backfill) is separated from the substructure by using sleeves over piles or using reinforced earth walls. 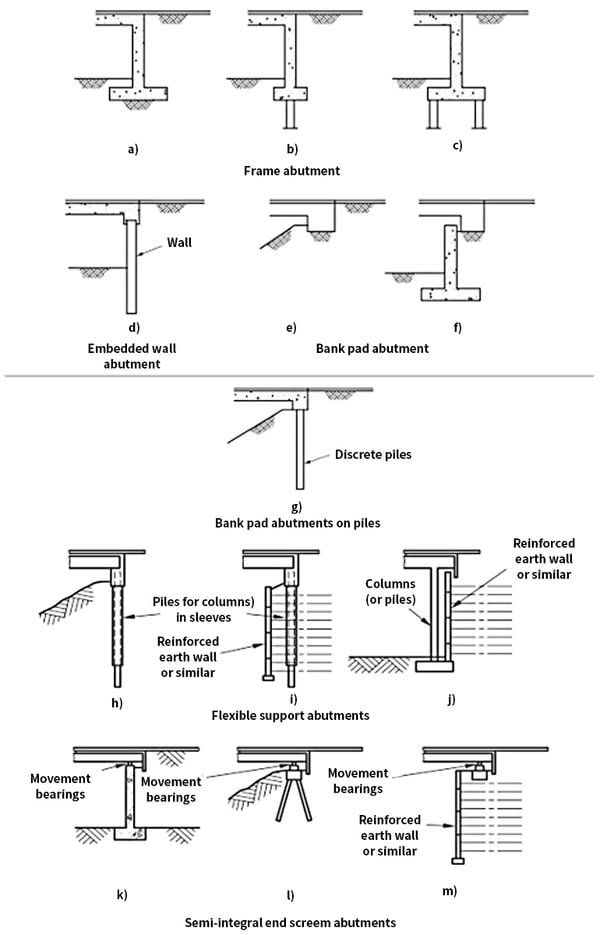 
Composite steel bridge deck typically constitutes steel plate girders with a concrete deck slab behaving monolithically. The deck slab acts compositely with the steel girders with the help of shear stud connectors. The construction of such a bridge involves, the steel girders being simply supported and then concrete being poured on the formwork supported on the steel girders. The stresses due to dead loads of concrete and steel are locked into the steel section. Once the concrete hardens, the composite section will undergo stresses due to other superimposed dead loads, the live loads, thermal actions, etc.

Location of the Example Bridge

Elevation of the bridge 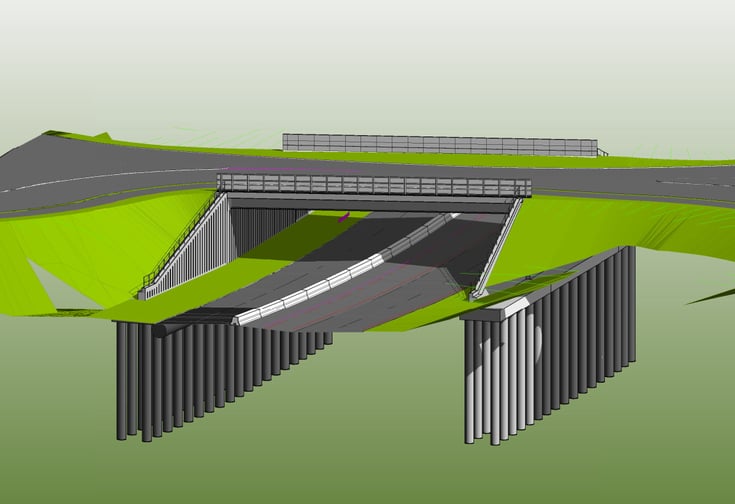 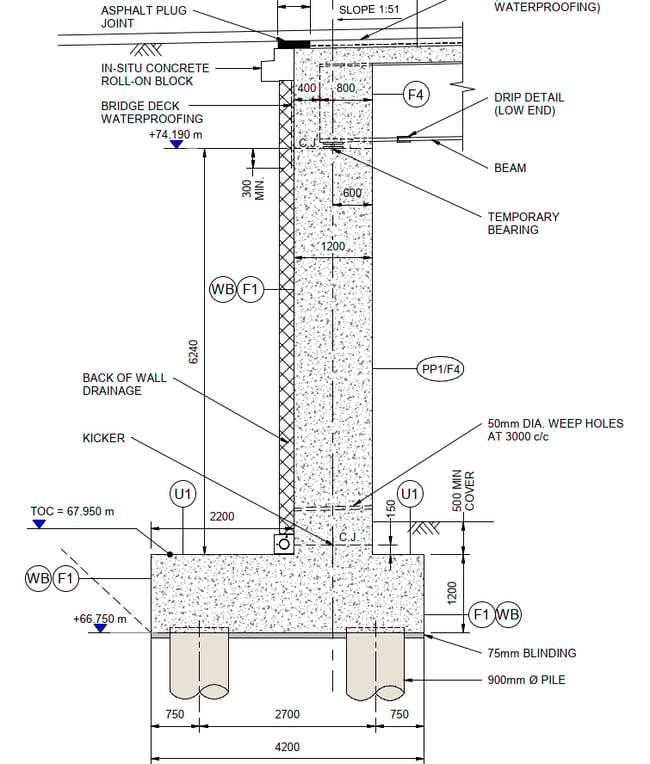 The first step of the design of the composite steel integral bridge is to dimension the steelwork. The dimensioning rules are derived from the Steel Construction Institute guidelines.

Components of a steel girder 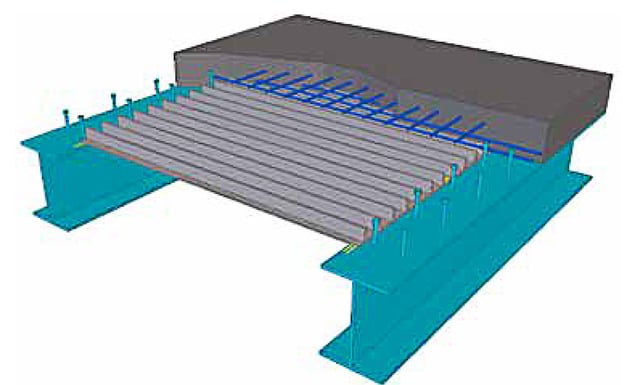 The next step of the design of the composite steel integral bridge is to dimension the concrete elements of the bridge including the deck slab, abutment, pile, and pile caps. The dimensioning rules are derived from the Steel Construction Institute guidelines and Eurocode detailing norms. 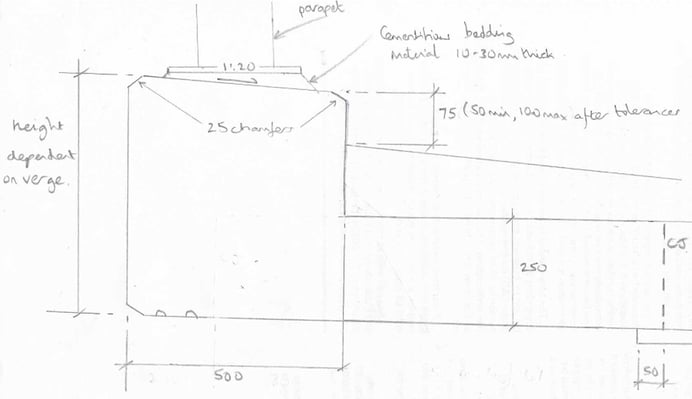 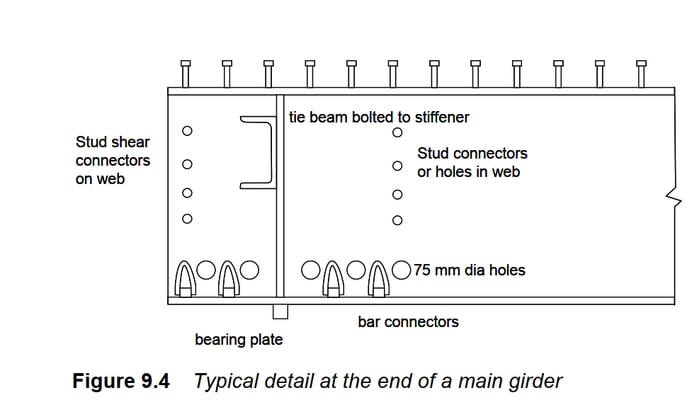 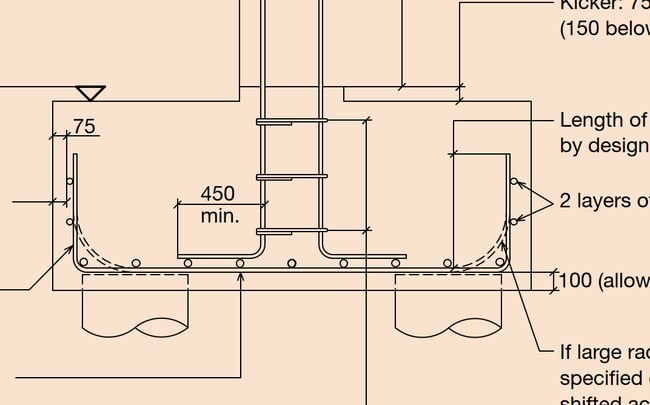 Another important point to consider is the sequence of filling earth i.e. backfilling the back of the integral bridge abutment. When the backfilling is done just after constructing the abutment but before placing the beams, the earth pressure at rest will act on the cantilevering abutment wall leading to a bending moment and base shear. The increased bending moment at the base of the abutment will lead to a more significant pile foundation and an increase in the cost of the substructure. Whereas, backfilling the abutment after constructing the bridge deck i.e. integral abutment, the earth pressure at rest acts on the abutment that acts as a propped cantilever leading to a reduced bending moment on the abutment but will increase hogging moments and axial compression on the steel girders making the steelwork more expensive but making substructure lighter. Though the latter case seems more reasonable as an increase in steelwork weight usually is less expensive than an increase in the size of the pile foundation. However, in this case, the first case was selected due to contractor preference as it was preferred to lift the steelwork from the back of the abutment. 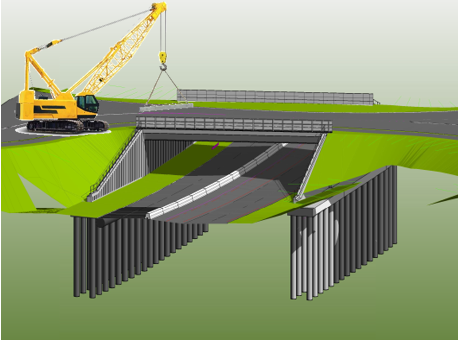 To analyze the global structure, a 3 Dimensional grillage model has been developed in midas Civil. The longitudinal members of the deck represent the Composite section. 15% of the span has been assigned with cracked slab properties longitudinally. The Transverse members comprise rectangular concrete section properties. The Abutment is modeled using Grillage elements (with dummy shells for pressure loads). The Pile Cap is modeled as a stiff pile cap with rigid links and the Piles are modeled as line elements applied with soil springs. 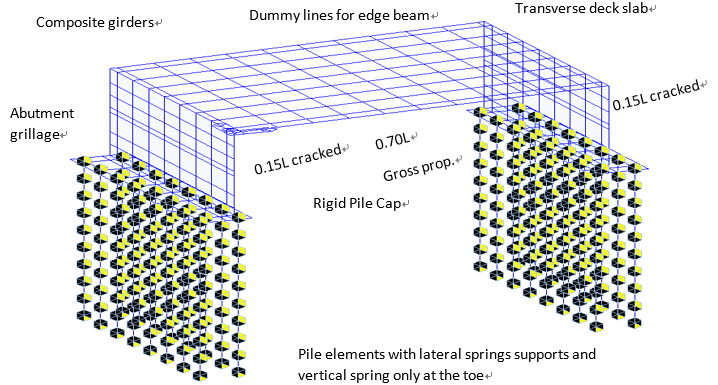 Dead load or self-weight applied in MIDAS using the self-weight functionality of MIDAS. Other Superimposed dead loads are applied with element beam loads and pressure loads.

The integral bridge does not allow any free movement of the deck and therefore thermal expansion and contraction cause stresses in the superstructure and substructure. 2 kinds of temperature loads are applied. The uniform temperature is applied using Element Temperature functionality in midas Civil whereas the nonlinear temperature gradient is applied using beam section temperature. 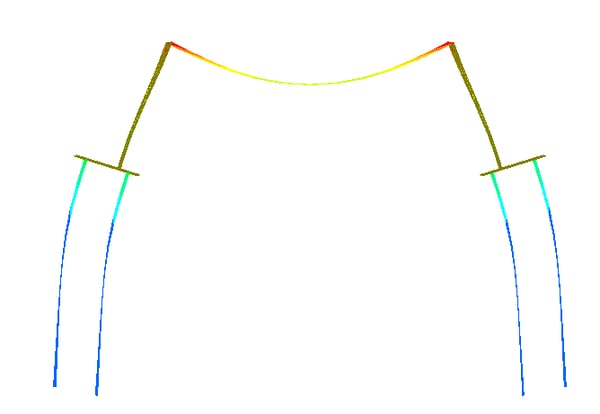 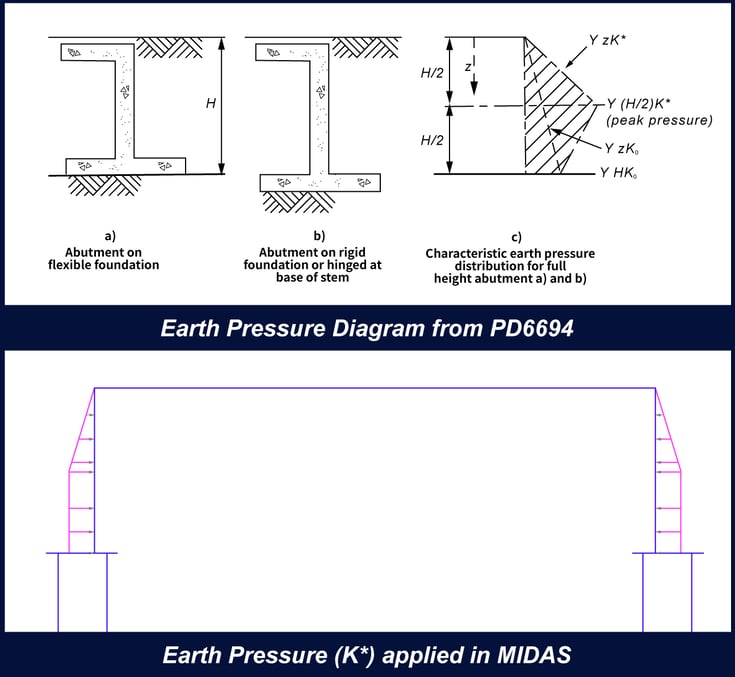 The traffic live load models are applied in accordance with the UK National Annex of BS EN1991-2 including Load Model 1, Load Model 2, footway pedestrian loading, Load Model 3 (SV100, SV19, and SOV250). The Moving Load Analysis feature in midas Civil has been used to perform influence line analysis and determine the most onerous vehicle load combination positions on the grillage model. 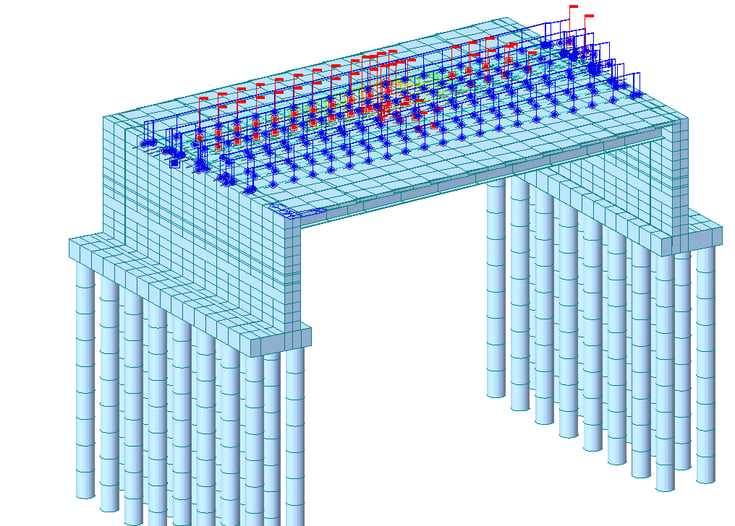 Horizontal Earth Pressure is generated due to Live load surcharge from vehicle loads near the abutment and that is calculated as per PD6694-1. The Live load horizontal surcharge is applied as Plane loads on the plate elements in midas Civil or as element beam loads applied over dummy elements. 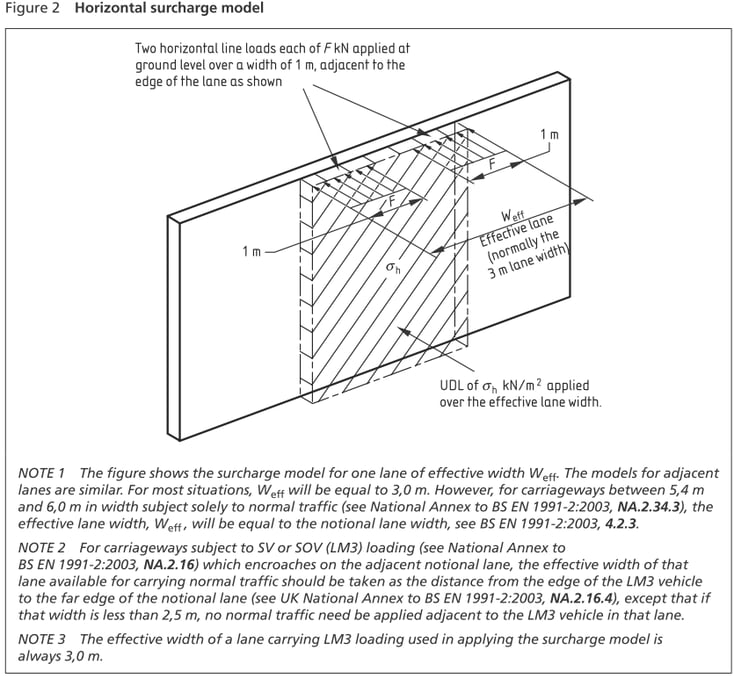 The construction sequence analysis is important for this type of bridge because of the changing loads, boundary conditions, and section properties of the elements. The earth pressure at rest acts before the steel girders are in place. The steel girders will be placed as simply supported beams on the abutment which will later become integral with the abutment and the longitudinal section properties will become composite. The various stages of construction are shown below. 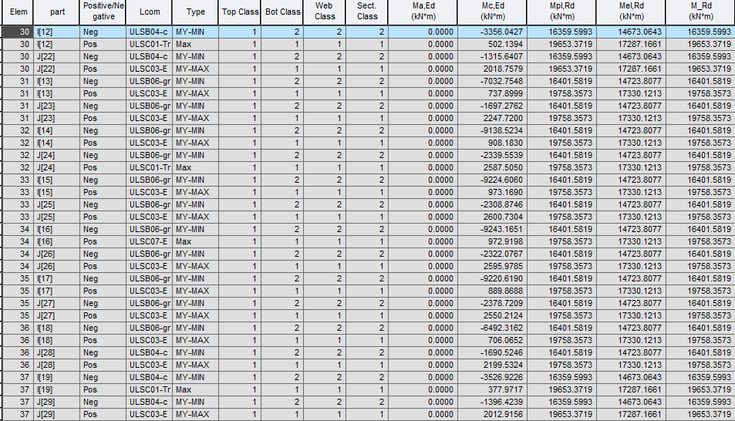 During the temporary condition when the steel girders are simply supported and the concrete is poured over the formwork, the steelwork is susceptible to buckling. Also, the bracings are to be checked for impact loads. Both these checks require conducting a finite element analysis with shell (plate) elements. 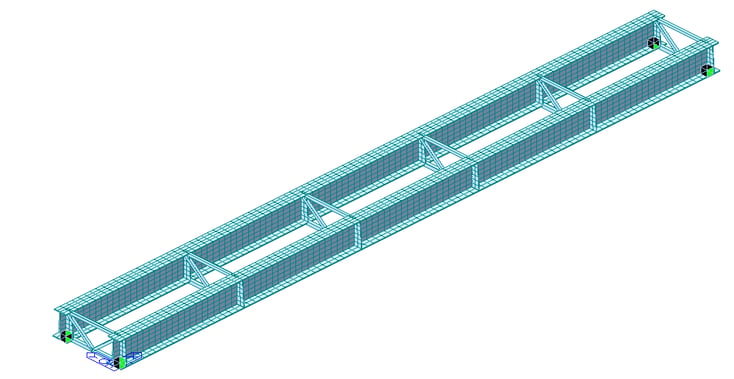 Transverse Reinforcement in the deck slab has been calculated using a local line beam model with a continuous beam approach with steel girders simulated as vertical supports. The global effects of dead loads in the slab is considered by taking differential deflections between 2 adjacent girders taken from the global grillage model.

Reinforced concrete elements like abutments, wingwalls, piles, and pile caps are checked using simple spreadsheets as per Eurocode 2. The pile design has been done using an iterative process with geotechnics. The pile cap total loads are shared with the Geotech team to run a 2D nonlinear analysis in Geotech software to provide the structures team with soil springs which were rerun in midas civil to arrive at revised pile cap loads. The revised pile cap loads yield a new set of pile forces from Geotech. Pile Cap is designed as a strut and tie model as shown in the images below. 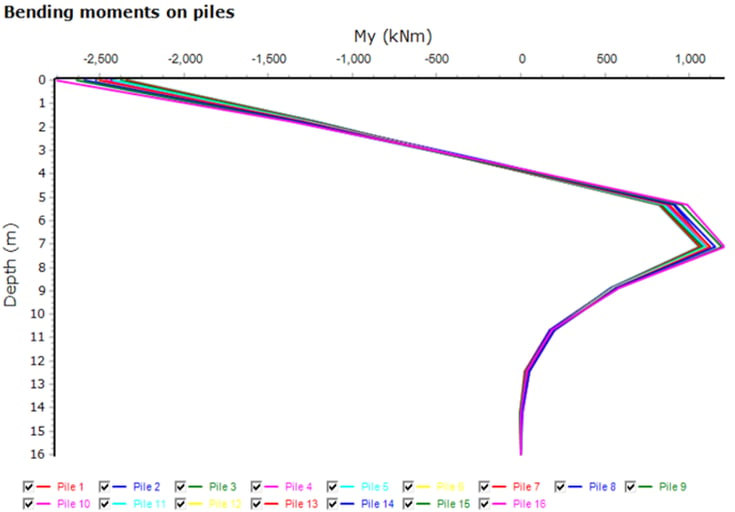 Abhishek is a structural engineer with more than 9 years of extensive experience in the design and assessment of railway and highway bridges and special structures across multiple geographies. 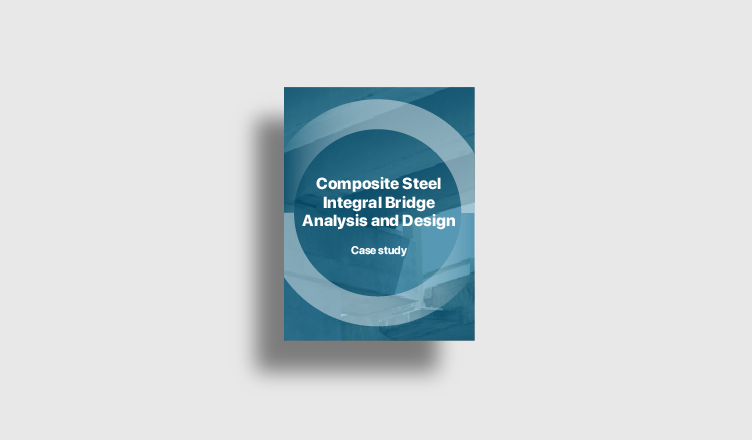