The key feature of Rail Structure Interaction (RSI) Wizard is to generate model files considering various parameters automatically for checking stress and displacement results. The wizard provides two modeling approaches, a simplified separate analysis method, a complete analysis method, and it considers boundary changes such as the changed resistance of ballast depending on trainload. After modeling, RSI Wizard generates a summary report to help a user to check results at once. 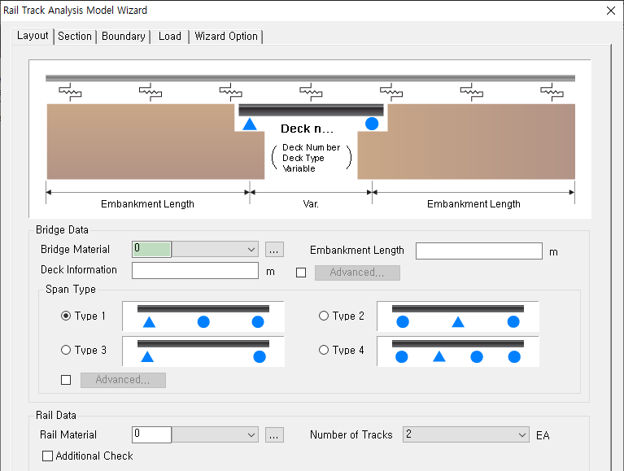 Under the Rail Data, the user can see the Additional Check option. This option is used to set additional conditions for the rail. The first one is the Zero Longitudinal Resistance (ZLR) option. This option considers the zero longitudinal restraint system of the rail but doesn’t provide longitudinal resistance to the rail. To set this option, input the start position and end position in which the ZLR is located. The below figure shows an example of ZLR zone.

The bed placed between the rail and its support structure is modeled using elastic link types that have multi-linear curves in RSI Wizard. Therefore, the longitudinal stiffness of the elastic links in the ZLR zone will be 0 when the Zero Longitudinal Resistance option is applied. 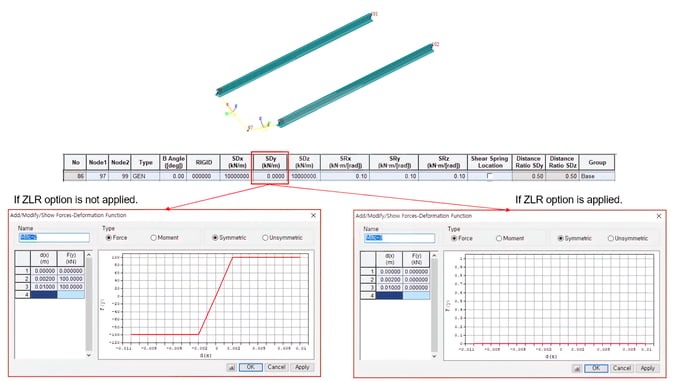 Once the layout information is set, we can move onto the Section tab. Here, the user can define the geometry section of a girder and a rail for each deck defined in the Layout tab. To assign a section to the deck and rail, the user can select one among sections defined in the section property feature. The ‘…’ button allows entering the section property feature to create other sections. For the section of rail, RSI Wizard provides 3 typical types(KS50, KS60, and UIC60). 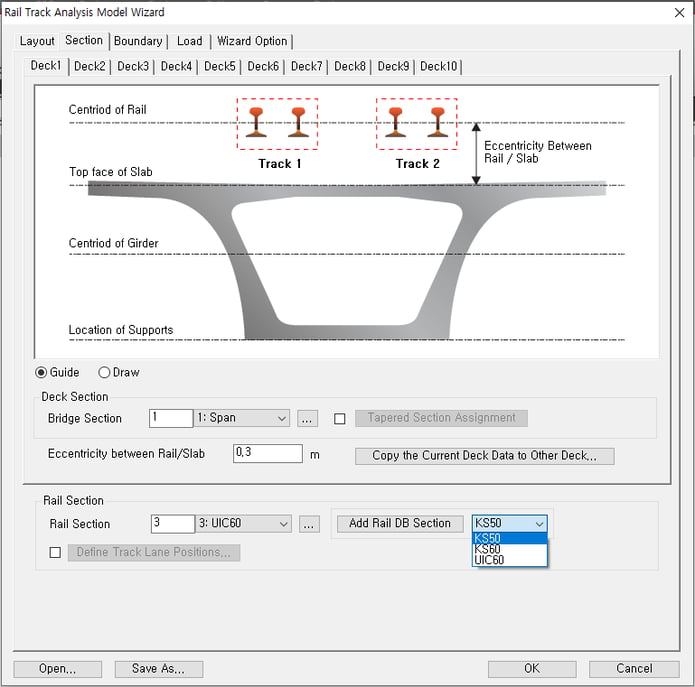 The Eccentricity between Rail/Slab option, Define Track Lane Positions, both options can control the location of tracks. The Eccentricity between Rail/Slab option sets the vertical position of elements for rails as shown in the figure below. The Define Track Lane Positions option sets the lateral position of rail elements. RSI Wizard allows creates two tracks, and the track can be symmetric arrangement or asymmetrical arrangement. 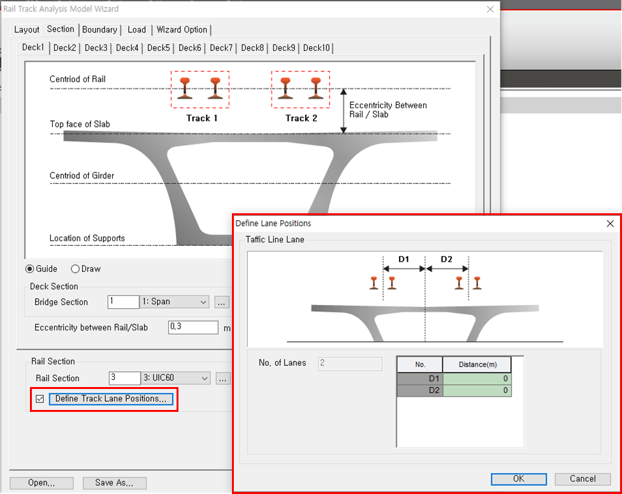 After that, move onto the Boundary Data tab and set information about the boundary conditions. The user can define options to consider the resistance of the track to longitudinal displacement and boundary conditions of the model.

First, have a look at the Longitudinal Resistance Data option. RSI Wizard provides the bilinear function for the resistance of the track. The user can input values manually to define the character of the rails desired. The bed type is available for the ballast bed and concrete bed. If both bed types are used for the project, use the Advanced option in the Define Condition to assign bed types along the length. 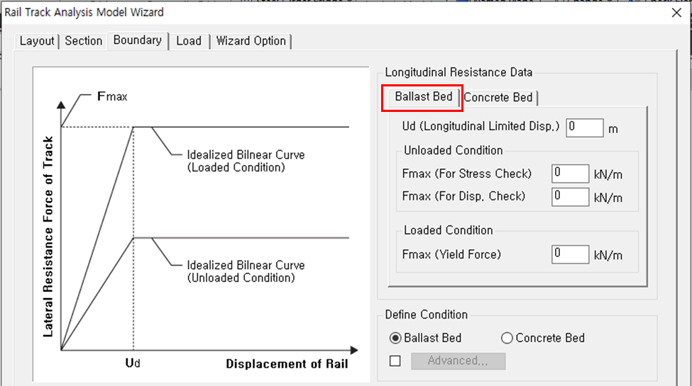 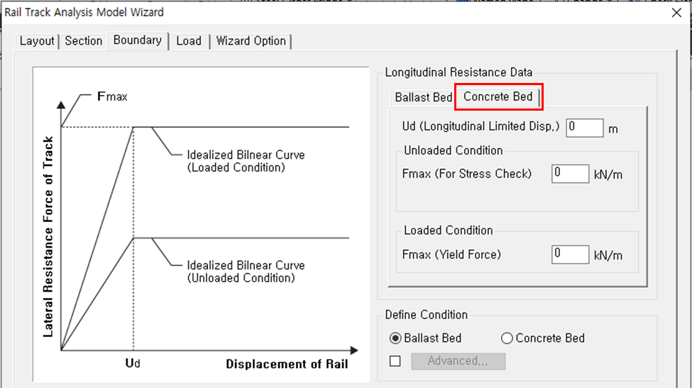 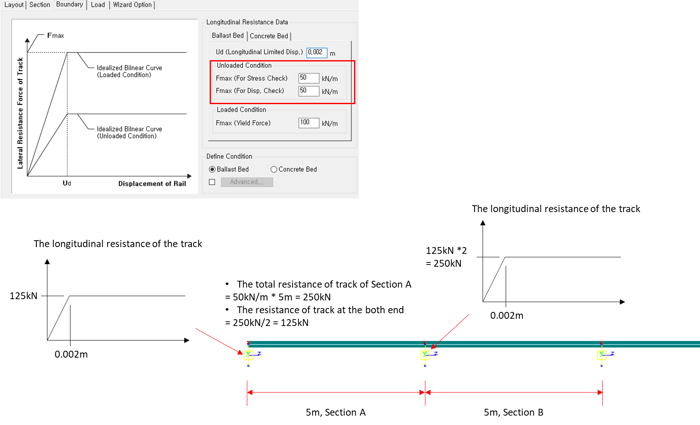 Figure 10. The calculation process of the longitudinal resistance of the track

If the Spring type is selected, the deck's support will be considered as a point spring type. In the same manner, the Advanced option allows setting different stiffness at each point spring.

If the ‘Bearing’ type is selected, the RSI Wizard will create a model for the bearing and pier of a bridge. Bearings are modeled as elastic links, and pier structures are modeled as single columns with the same section. At the bottom of the pier, the user can apply fixed support or spring support. In the same way, if the ‘Advanced’ option is selected, the user can apply different elastic links, the length of the elastic link, and pier at each deck. Furthermore, the Guide option in the Boundary tab presents the model shape before generating a model to help users understand how a model shape will be created. 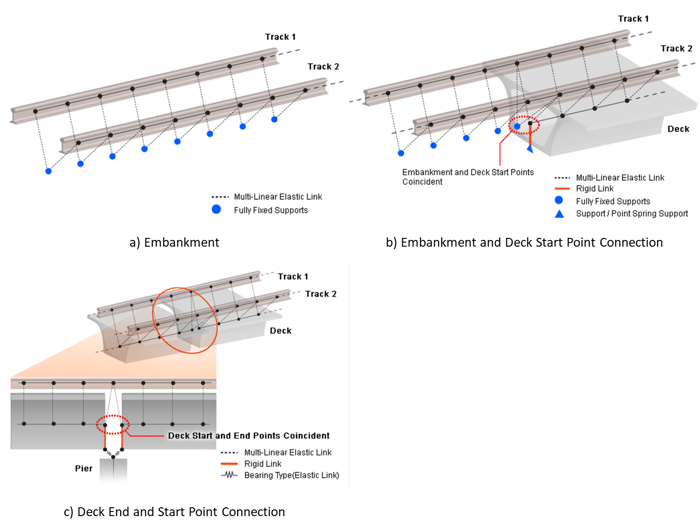 Once the Layout, Section, and Boundary information are defined, we can move onto the Load tab. Here, we can define load types that are needed for RSI analysis. 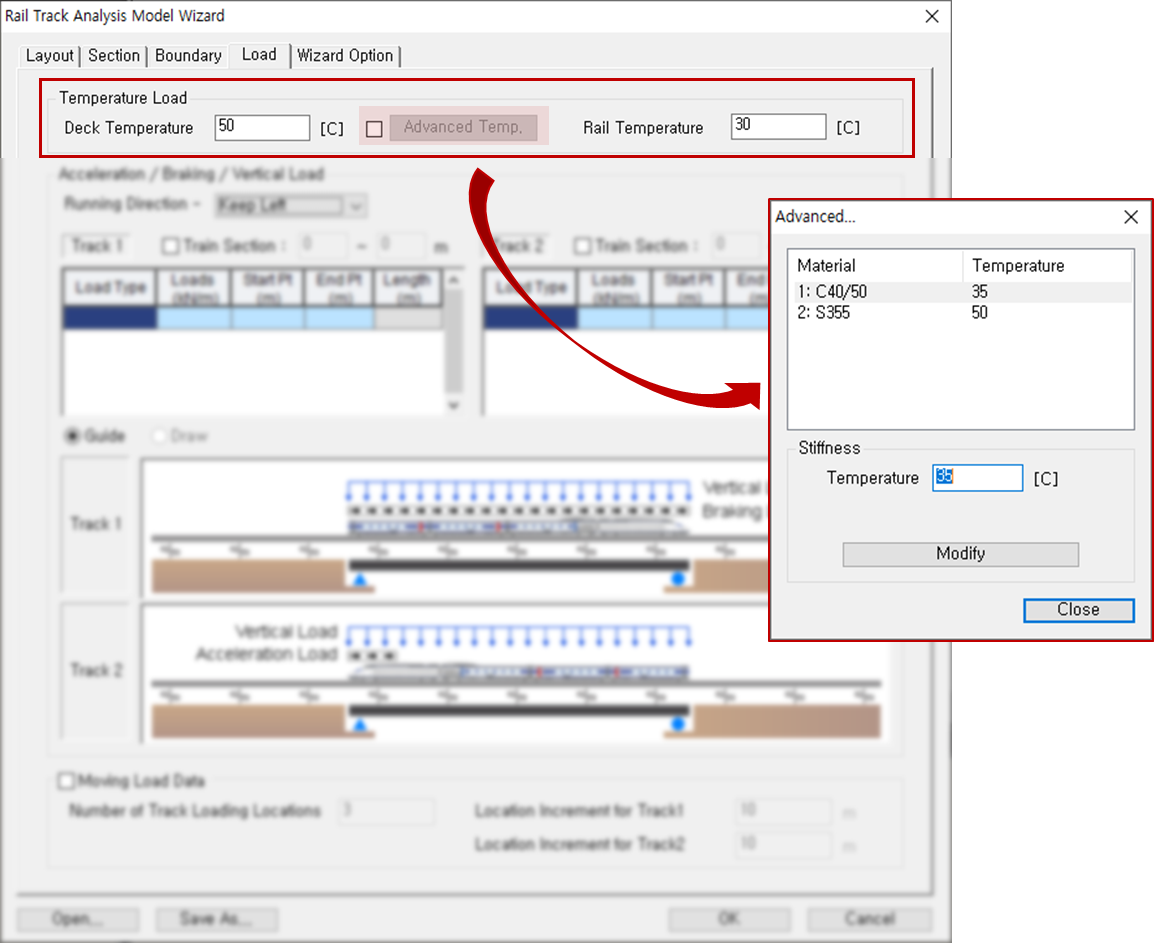 The second one is regarding the trainload. The user is able to define the magnitude of acceleration, braking, and vertical load in the table format. According to UIC 774-3, in the case of a bridge carrying two or more tracks, the acceleration forces on one track are added to the braking forces on the other track, and only two tracks need to be considered. The RSI Wizard allows defining the position of two tracks; therefore, the definition of loads is available for two tracks.

The direction of loads can be controlled using the Running Direction option. One-way direction, either Left or Right, can be selected for a structure having one track. If the structure has two tracks, loads with different directions will be applied to each track.

The trainload combines acceleration/braking loads and vertical loads. Each load needs its position to apply to a model. Especially, the length in which vertical loads are applied will be recognized as the length and location of a train. If the vertical load is not defined, Train Section should be set instead of defining vertical loads. In the section in which a trainload is applied, the resistance of the loaded track will be applied.

The last step is to set information in the Wizard Option. The Wizard Option contains 3 options. The first one is the Modeling Option. This option splits the whole element model using an input in the Element Length. The user can select the unit as meters or feet.

According to the UIC Code, the analysis methods described below can be used for the track-bridge interaction analysis using the software. Depending on the software, either of the methods can be used. However, it should be noted that there can be errors between the two analyses.

Two or more nonlinear models having each load alone are analyzed and the results are combined. This is the simplest way of analyzing the rail-bridge interaction as it assumes that the superposition of the analysis results is allowed, which is normally not allowed in the nonlinear analysis. According to the UIC774-3 Code, generally 20%~30% larger stress can occur in the rail. 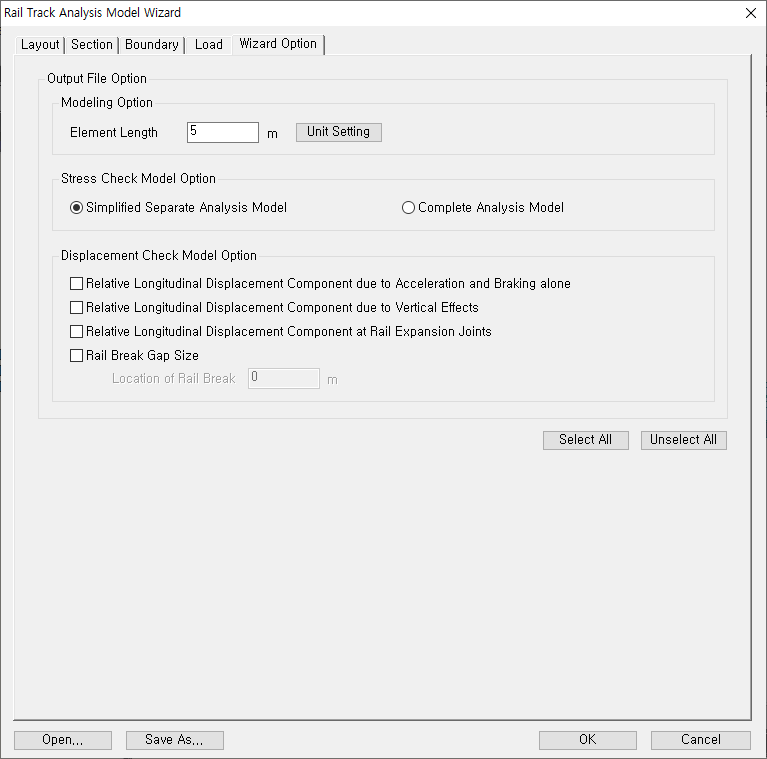 After clicking the OK button, the RSI Wizard generates model files depending on the options checked. The file names are shown below:

RSI Wizard contains the Rail Track Analysis Report, which is a post-processing feature. Rail Track Analysis Report is used to analyze all the models and obtain the compiled excel file. It provides a final summary sheet with checks based on UIC 774 - 3.  These check limits are manually modified for regional codes. This report wizard could only be used with the Simplified Separate Analysis option. The Complete Analysis Model is not supported for the report. The report will contain tabulated data as well as graphical output for individual rail stresses, rail and deck relative displacements as well as deck absolute displacements. An example of the results is shown below. 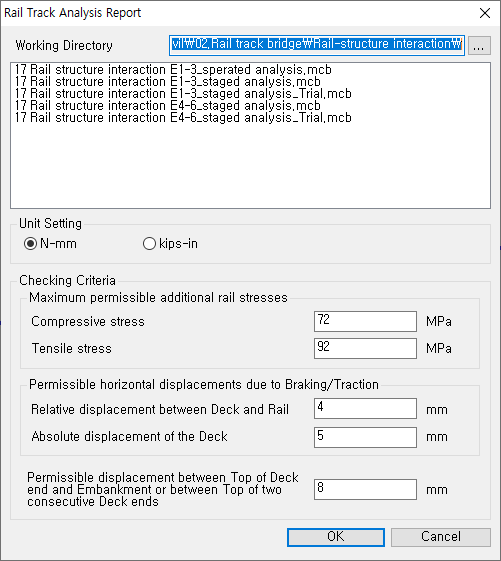 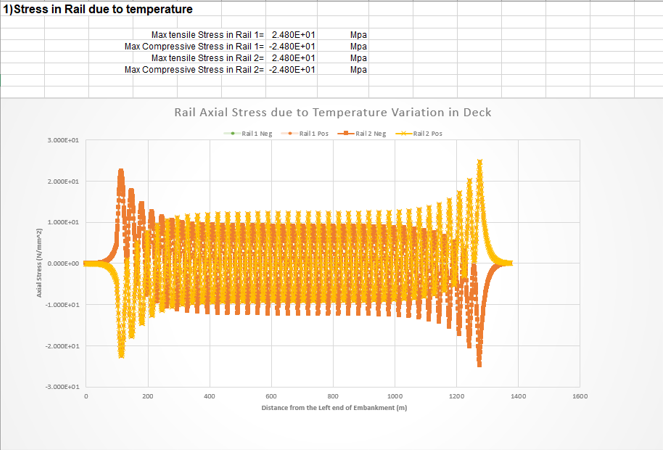 Figure 19. Stress in Rail due to Temperature 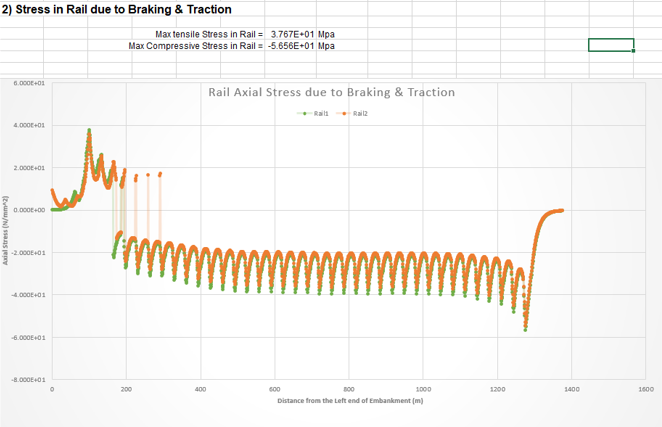 Figure 20. Stress in Rail due to Braking & Traction 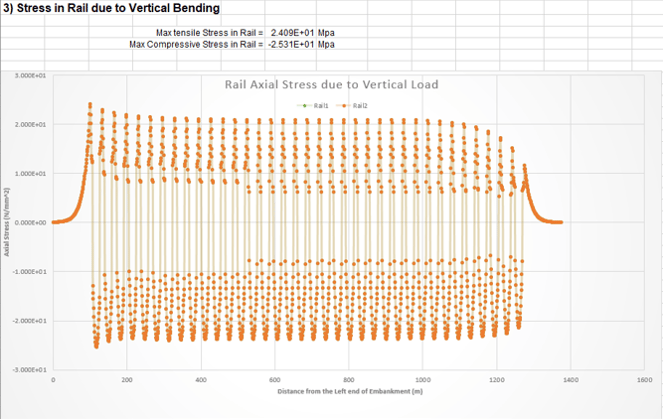 Figure 21. Stress in Rail due to Vertical Bending

Figure 22. Stress in Raile due to Temperature, Braking-Traction & Vertical Effect 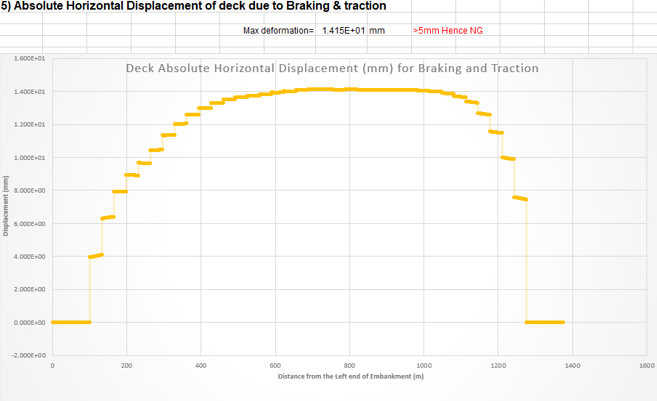 Figure 23. Absolute Horizontal Displacement of the deck due to Braking & Traction 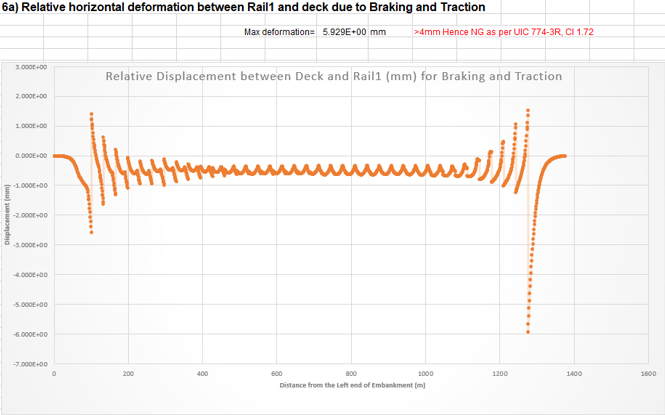 Figure 24. Relative horizontal deformation between Rail1 and deck due to Braking and Traction 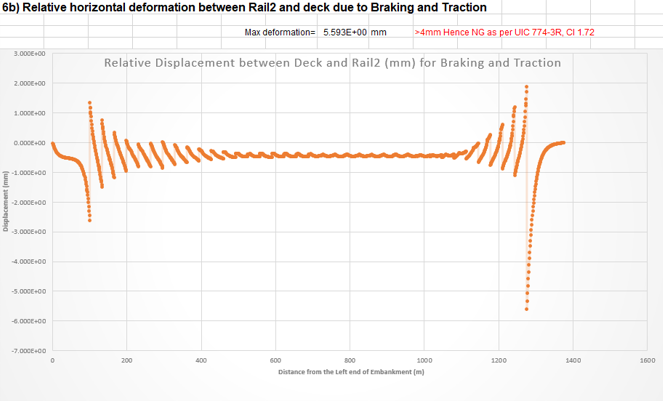 Figure 25. Relative horizontal deformation between Rail2 and deck due to Braking and Traction 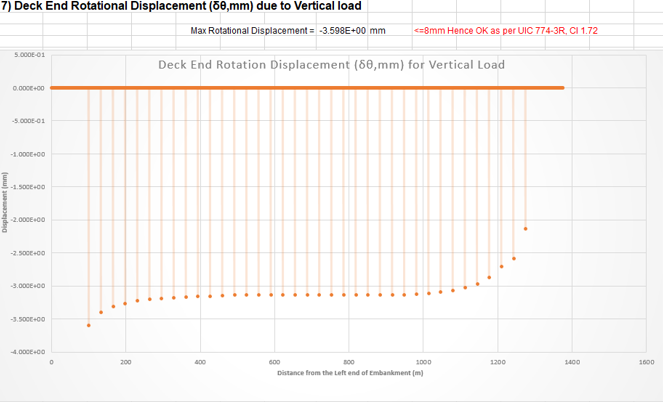 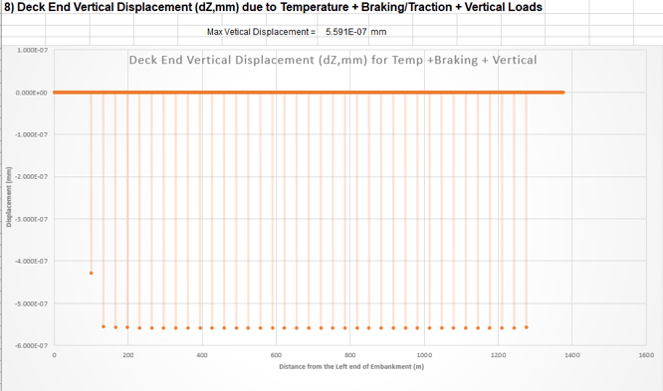 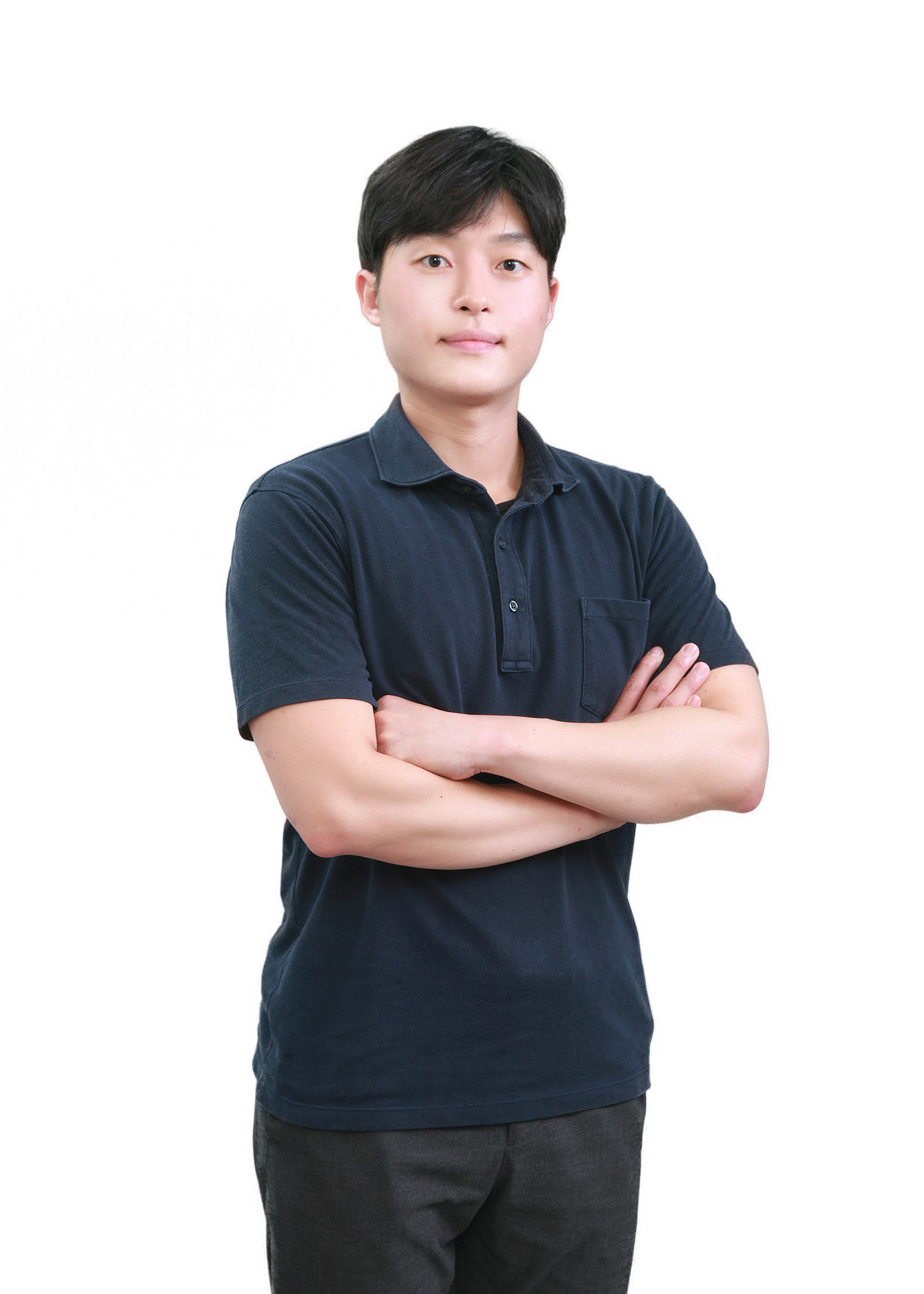 Taeyong is a bridge engineer within MIDASIT Technical Planning Team in South Korea. He has over 3 years of experience in the design of bridges and civil structures in Korea. He is familiar with international codes of practice including AASHTO, Eurocode and BS code. He has experience in discussing technical issues with engineers in Singapore, Malaysia, and Romania.

CASE STUDY Assessment of PSC Bridges as per CS454