Concepts of Plastic Hinging and Pushover Analysis with midas Civil

In the design of bridges, it is often unreasonable and impractical to design elements to resist strong seismic movements elastically. Thus, it is common in Seismic Design Methodologies to permit ductile yielding of elements to reduce the overall forces resisted by the bridge.

The webinar highlights the importance of plastic hinges in bridge seismic design. It also introduces Pushover Analysis (PA), which is continuously gaining popularity over the last few years.

1. Why is Pushover Analysis needed in the analysis of bridges?

2. Importance of Plastic Hinges on bridges

Plastic hinges are primarily energy dispersing elements that occur in the event of a strong earthquake. The economic savings and design protection to other elements due to plastic hinges highly outweigh the cons of dealing with repairable damages.

During the 'Learn the basics of Pushover Analysis using MIDAS Civil' session, the speaker shows how to set up the model, define hinges, pushover procedures, and interpret results.

What are Plastic Hinges? 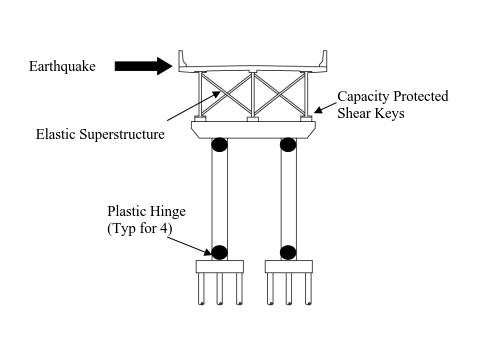 A plastic hinge is a section of an element where plastic bending occurs. Plastic hinges are developed when a section has exceeded its elastic capacity and has entered plastic behavior. It should be noted that they are NOT true hinges and will continue to have lateral resistance up to a certain point.

To better understand plastic hinges, consider the simple single-degree-of-freedom (SDOF) structure below, with an expected hinge at the column base:

The plastic hinge forms after a section reach yield capacity and will be able to accommodate increased displacements under plastic behavior, which can be a considerable amount just before the collapse.

Plastic hinges are commonly considered energy-damping devices that allow increased displacement of the bridge via plastic rotation. It is permitted in various design codes, including those using the traditional Force-Based method of design.

The formation of the hinges allows plastic deformation, which in turn reduces the peak elastic seismic design force needed to be resisted by the bridge.

Although plastic hinge formation causes irreversible deformations, they are only allowed for strong seismic events with a low probability of exceedance.

Pushover analysis is a technique in which a structure is subjected to incremental loads controlling either forces or displacements. It is a nonlinear static method of analysis that uses explicit nonlinear methods to assess the structure's capacity. It also approximates the sequence of cracks, yielding, and plastic hinge formation of the structure.

The analysis of the structure via pushover analysis assumes that structures oscillate predominantly in the lower modes of vibrations during seismic events, which reduces a multi-degree of freedom system (MDOF) to an equivalent single-degree-of-freedom system (ESDOF).

To better help in understanding the concept of pushover analysis, consider an SDOF system with an incrementally increased lateral force.

Incrementally increasing the lateral force causes the structure to undergo the following stages:

The pushover analysis records these stages, and a corresponding pushover curve is produced. 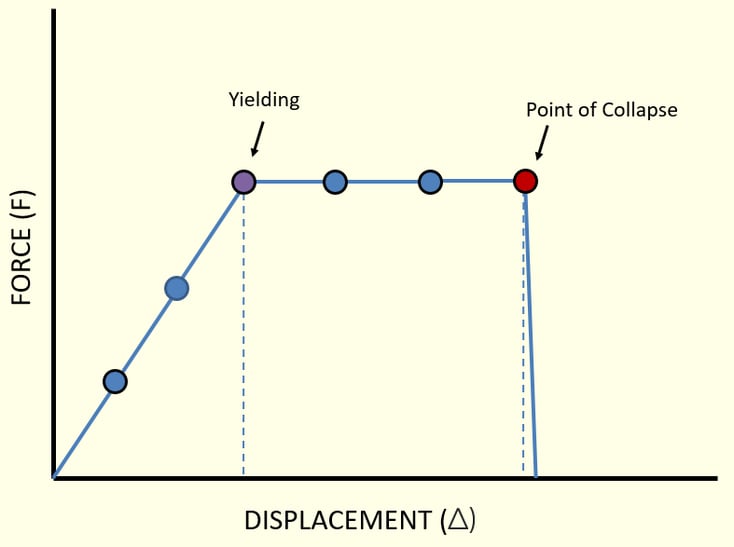 For the more straightforward direct pushover method, the procedure can be summarized as below:

Midas Civil is capable of all analysis and investigations to carry out a pushover analysis of a bridge properly. As an introductory guide, consider the following steps:

It is important to check the results of the RSA analysis if the behavior of the bridge has been properly identified. The check is normally done by verifying that the cumulative mass participation is at least 90%. The governing period of the structure should be noted because this value is checked versus project and code requirements.

The results can be seen via Results Tab -> Results Tables -> Vibration Mode Shape. 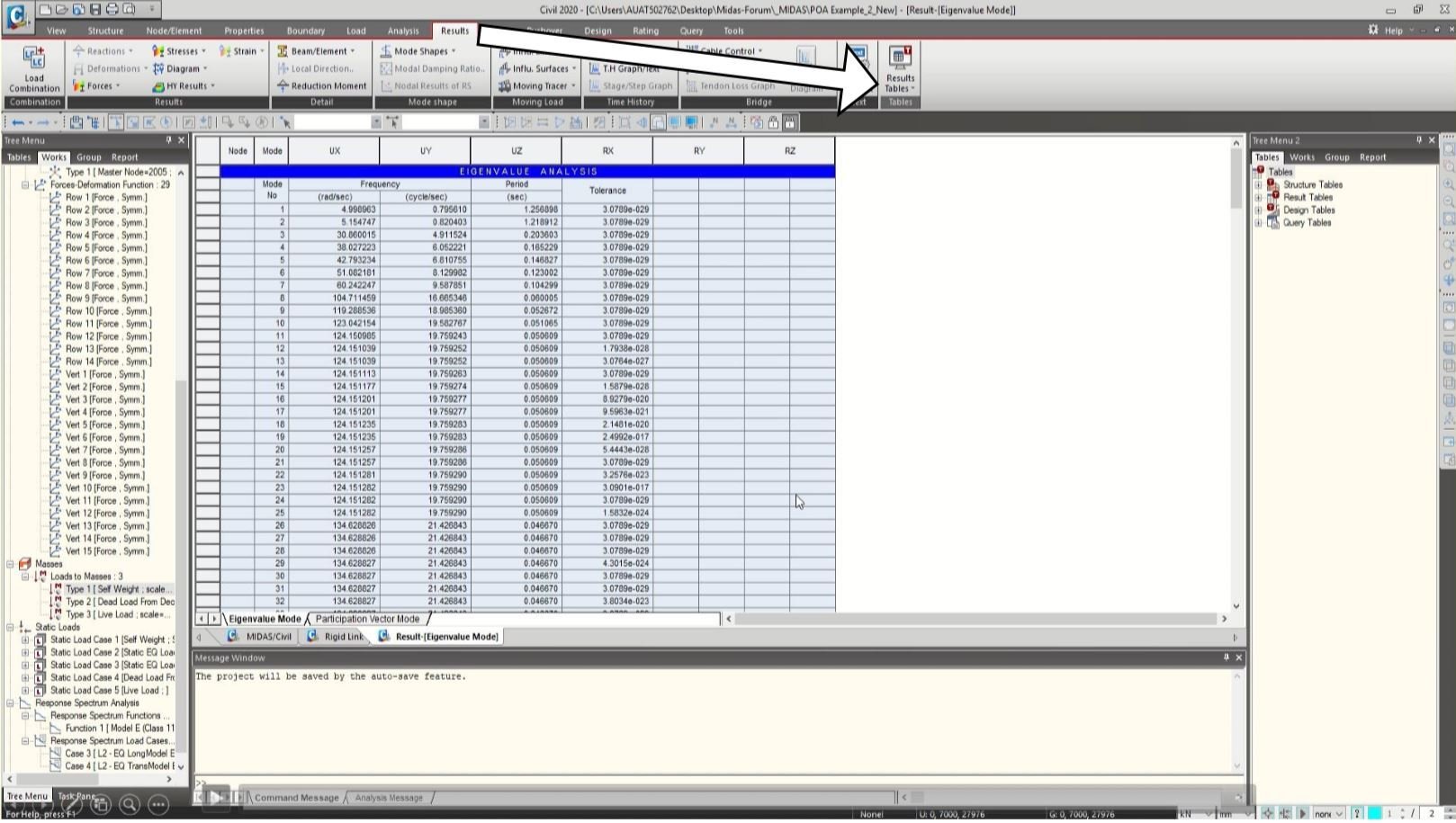 The Pushover Global Control window in midas Civil allows us to define various general settings for the pushover analysis.

It is accessed via Pushover Tab -> Global Control.

Load Cases are defined via the Pushover Tab -> Load Case.

The load case can either be Load Controlled or Displacement Controlled. The Load Patterns for the pushover analysis are also defined in this window.

The General Section Designer allows us to define sections (steel, concrete, composite) and their corresponding inelastic properties. Various Hysteresis models are defined in the program by default, requiring inputs determined from the relevant design code. 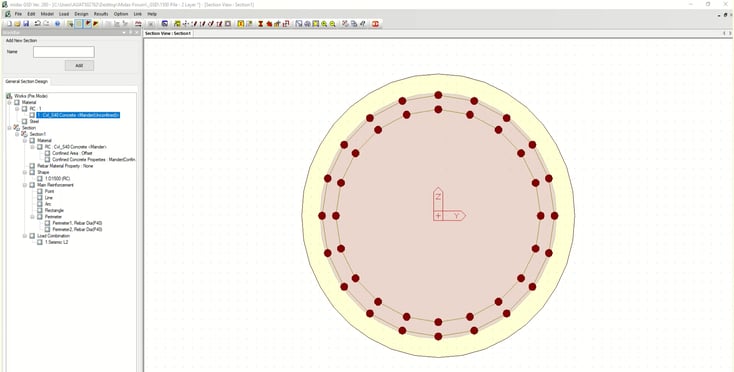 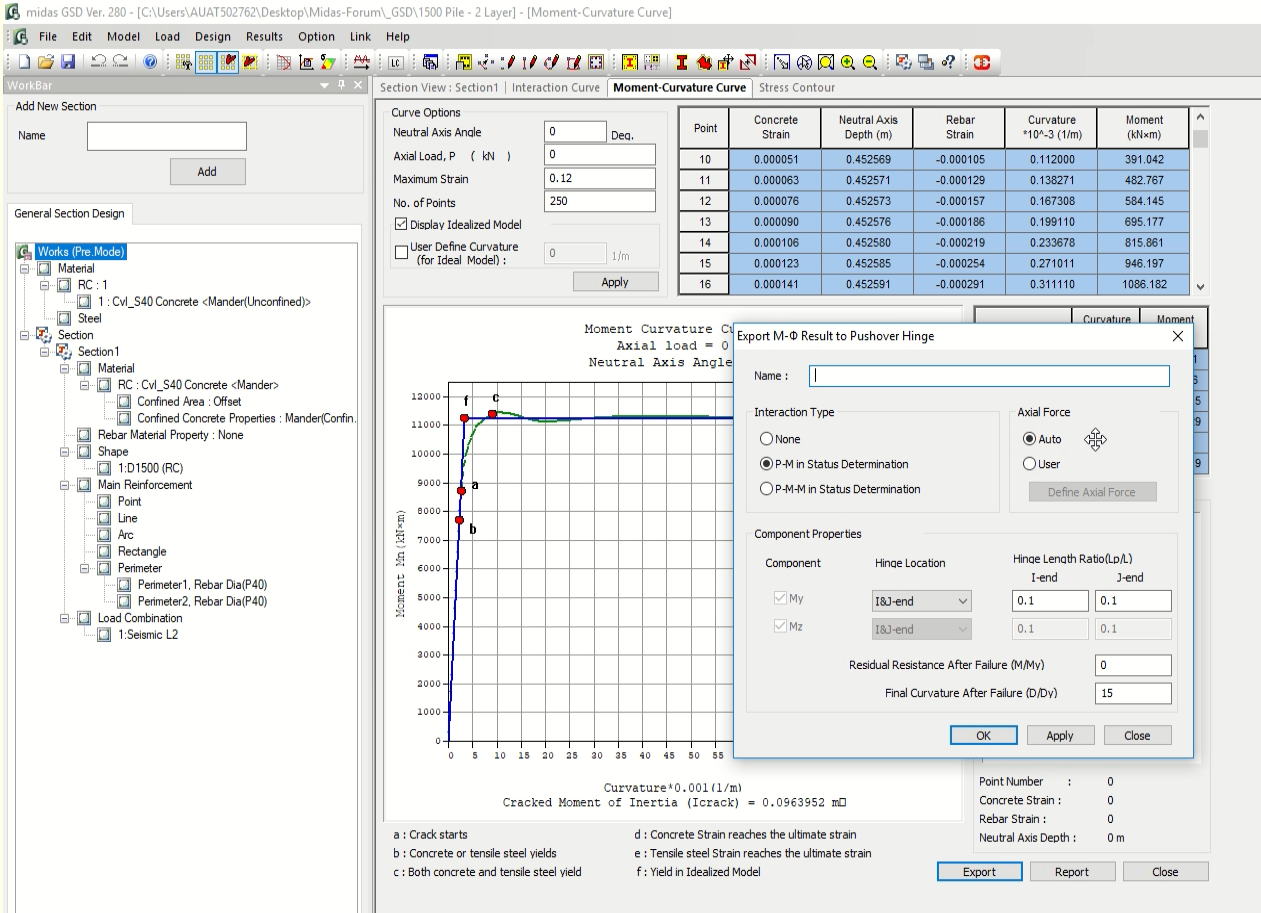 After assigning the hinges and performing the Pushover Analysis via Pushover Tab -> Perform Analysis, Reactions, Deformations, Forces, and Hinge Status can be seen under the Pushover Tab.

Each step in your pushover analysis has corresponding results. If you aim for a specific step, such as the first yield, you can move through all results via the Tree Menu window. 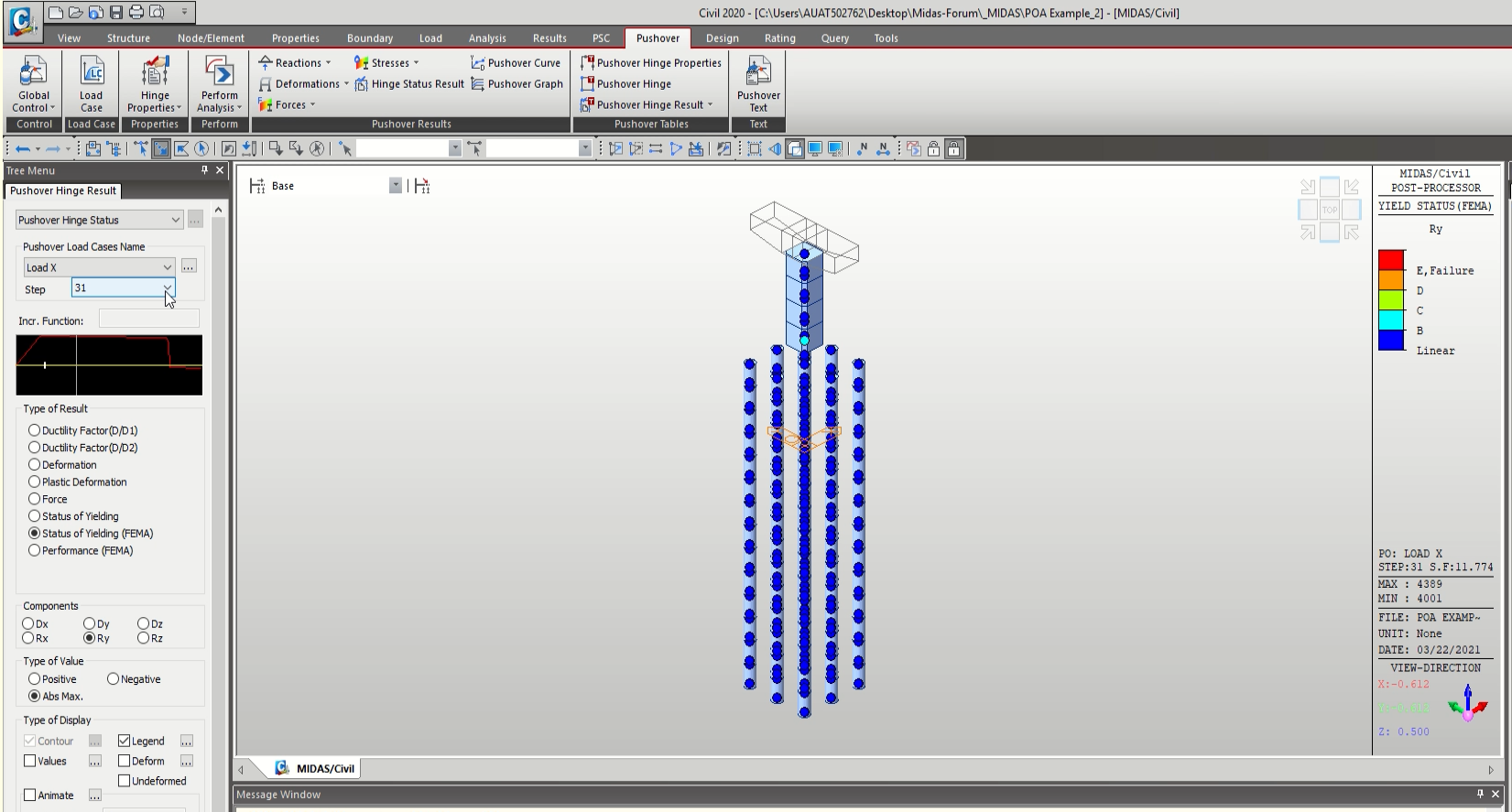 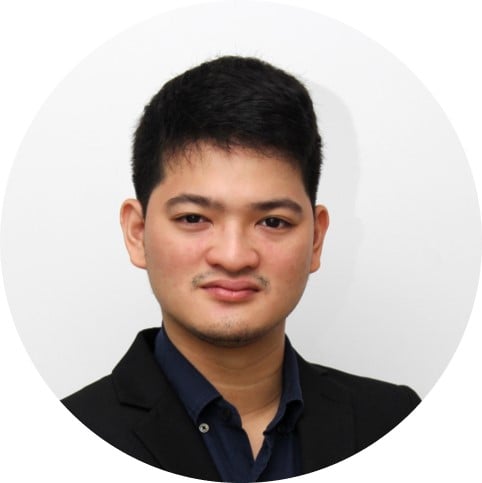 Patrick has six years of experience in the design and modeling of local and international infrastructure projects. He is knowledgeable in both Structural and Highway design and is very familiar with various design standards, including the Australian, Middle East, British, American, and the Philippines. His experience includes bridge, tunnel, and civil structure design, highway alignment and profile design, and surface modeling and analysis. 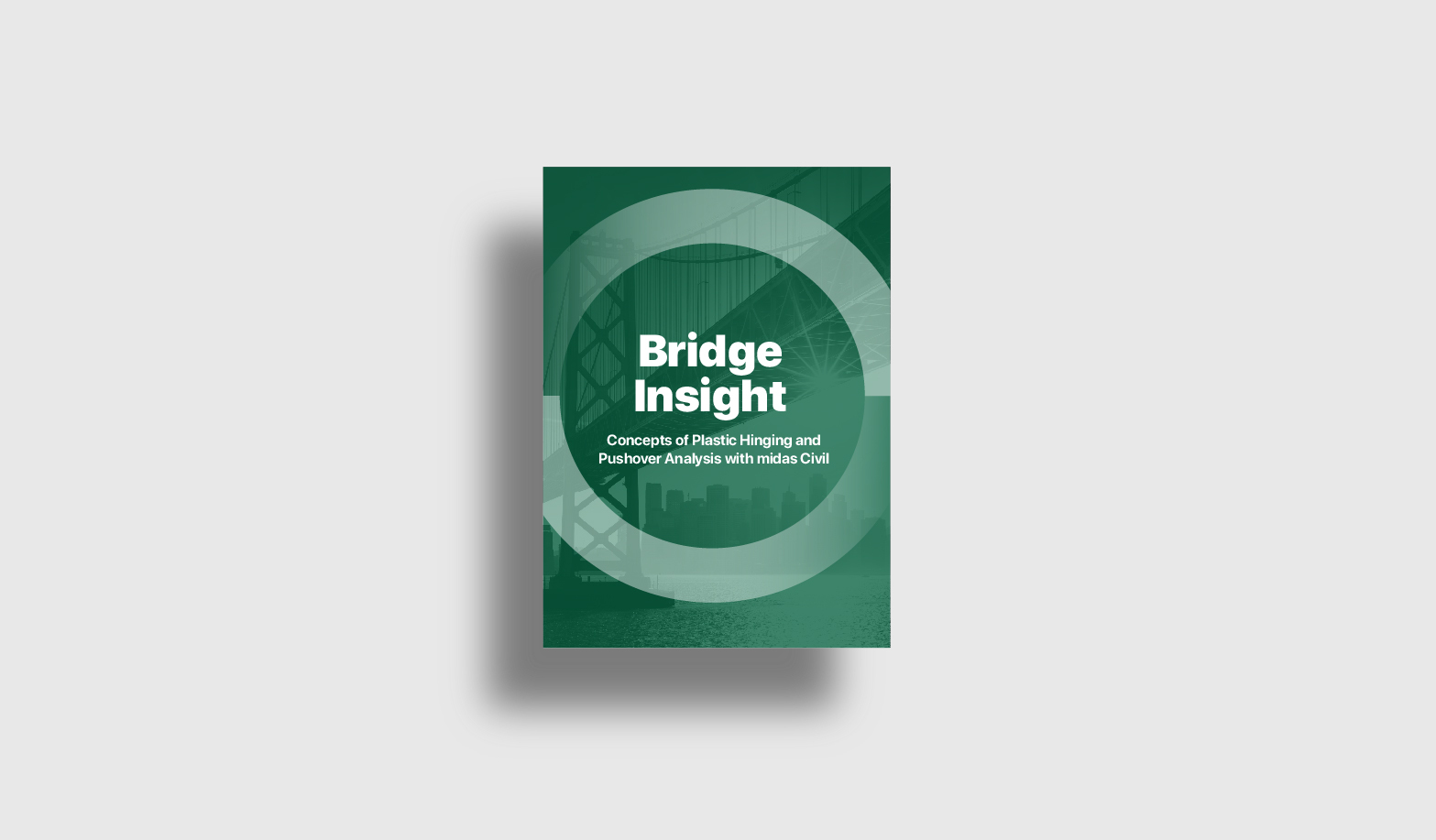 Please fill out the below form to
download the webinar presentation