Prestressed concrete technology is widely used worldwide in the construction of various structures, especially bridges. Prestress concrete was first used in bridges in 1946 in a railway bridge in the UK (Adam Viaduct, Figure 1). By 1960, prestressed concrete bridges largely superseded the conventional RC bridges, with box girders and I-girders being the dominant form.

Many prestress concrete bridges underwent deterioration before their design service life due to corrosion and other environmental factors. Long-term durability has become a serious concern and needs to be considered in designing and constructing a prestressed bridge apart from structural safety, economic and aesthetic point of view.

This issue has led to innovative solutions such as external prestressing, highly eccentric external tendons, and extradosed prestressing. Here we have tried to present an overview of these innovative advancements in prestressed concrete bridges.

We have seen that externally prestressed bridge has several advantages over internal prestressed bridges. However, some disadvantages of externally prestressed bridges are the lack of flexural strength due to smaller tendon eccentricity than the internal prestressed section as the eccentricity is limited by the bounds of the cross-section (i.e., at the bottom of the slab in case of box girder). To enhance the flexural strength, one possible solution is to make the tendons highly eccentric (Figure 3). This solution is possible only in external prestressing as we can place the tendons outside the concrete section. The compressive stress is taken by concrete and tensile force by external tendons, thus taking advantage of both materials. By introducing eccentric external tendons, the flexural strength can be significantly improved or, conversely, the amount of prestressing can be reduced, resulting in a more economical design. 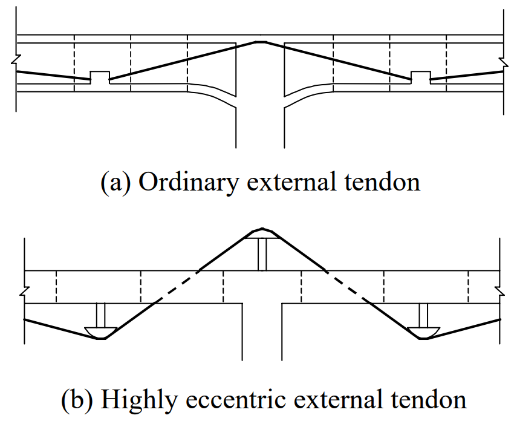 By extending the concept of highly eccentric external tendons to continuous bridges, the structural performance can be further improved (Figure 4) 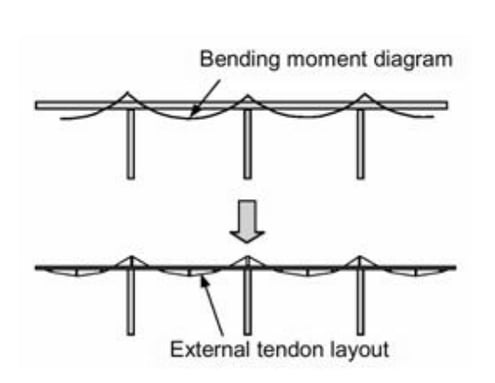 The world's first application of prestressing with highly eccentric external tendons was a two-span continuous, unsymmetrical girder bridge, Boukei Bridge, in Hokkaido, Japan. The layout and complete view of the bridge are shown in Figure 5 and Figure 6. 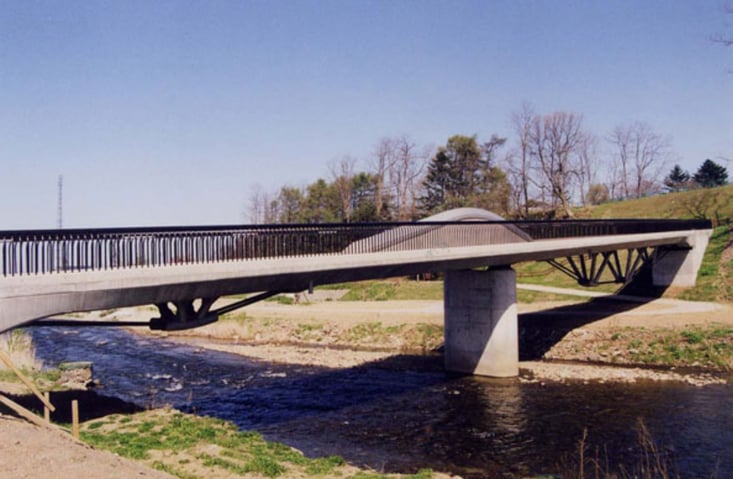 After carefully studying the Boukei bridge, it can be seen that the tendon layout takes a similar shape as the bending moment diagram in Figure 4. The tendon layout depicts a pseudo truss with the main girder as a compression chord, external tendons as tension chords, and the steel deviator as diagonal chord elements, thus allowing the girder depth to be reduced drastically, making the bridge lightweight. However, the vibration characteristics under service loads may be a concern as the stiffness of the main girder is reduced, caused by a reduction in the height of the deck.

Extradosed prestressing as a concept was first proposed by Jacques Mathivat in France for Arrêt Darré Viaduct's project, which was not later selected. He took advantage of limited pylon height to consider cables as tendons and not as cable-stayed and gave them the name extradosed cables (Figure 7). 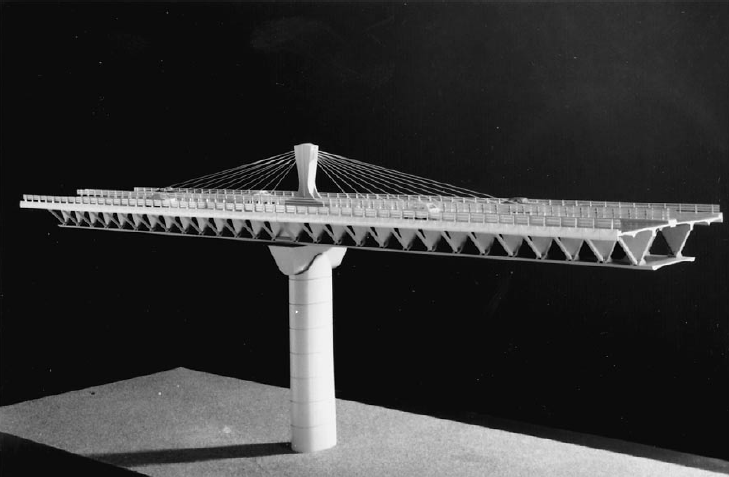 Mathivat's extradosed bridge solution was widely used in Japan with several elegant bridges like the Odawara Blue Way Bridge, which was considered the first extradosed prestressed concrete box girder bridge in the world.

Corrugated Steel Web and its Application to Prestressed Concrete Bridges 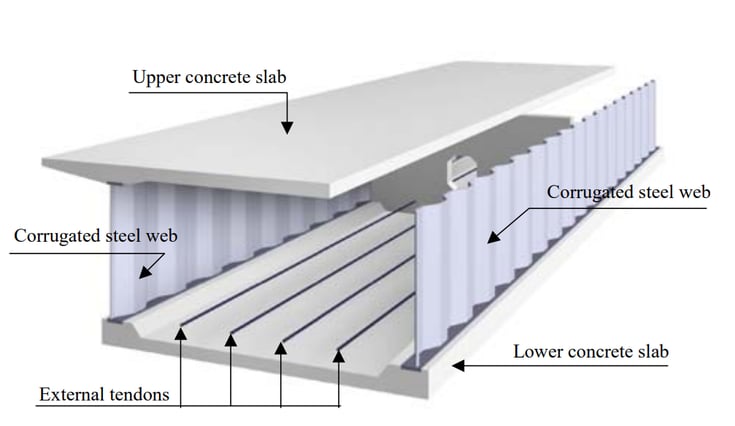 These advancements have improved structural properties in terms of safety, aesthetic, and economic aspects. The primary purpose of these innovations is to enhance the long-term durability of the structure, which is a severe problem in concrete structures these days. External prestressing with high eccentricity and extradosed prestressing are great examples of external prestressing technology to achieve improved structural performance. The corrugated steel webs have proved to be a promising solution for longer spans and reduced construction costs. 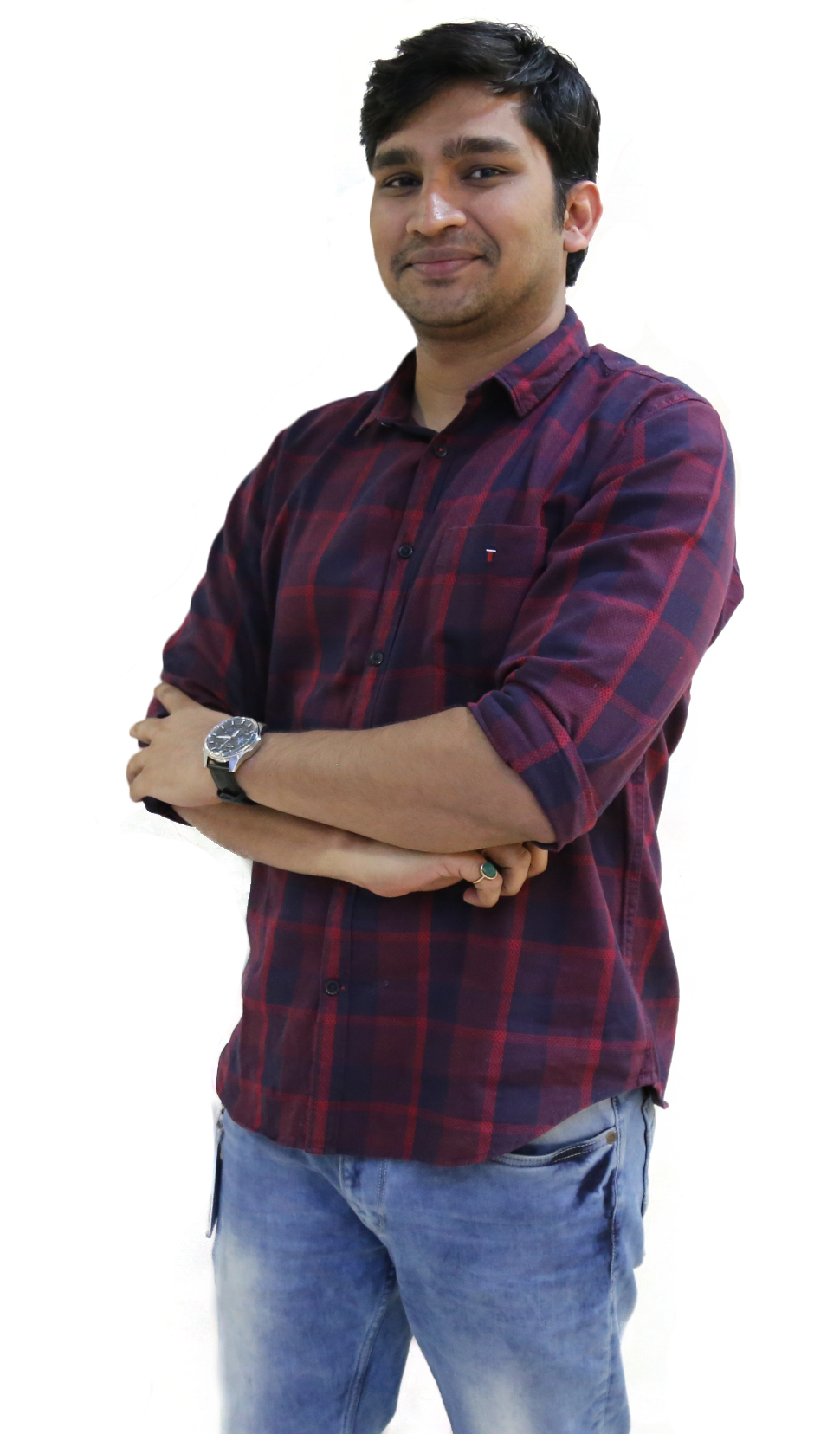 Anuj is currently working with MIDAS IT India as a Senior Structural/Bridge Engineer. He has over 4 years of experience in the design and review of bridge/building projects. He has performed rail structure interaction for various major railway bridges in India. He pursued his Master's Degree from IIT Madras and is experience in handling complex technical issues related to bridge engineering projects