Chenab Bridge is being constructed over the Chenab River in the Himalayas. This arch-shaped steel bridge will become the world's highest railway bridge, with a total height of 359 m (1178 ft.) above the river, 35 m taller than the Eiffel Tower. It will connect Baramulla to Jammu.

The current highest railway bridge record is held by the Beipan River Shuibai Railway bridge in China, with 275 meters in height. When compared with the expected height of 359 meters of the Chenab Bridge, one can infer the considerable difference in both, thus making this bridge an engineering marvel. Not just because of its height, even from design & construction prospects, it stands out from the conventional approach.

This 1,315 m long bridge uses steel around 25,000 tons & will cost the Konkan Railway Corporation an estimated amount of $92 million. The structure consists of a two-ribbed steel arch flanked by concrete approach viaducts on both the side.

The bridge is expected to have a lifespan of 120 years & a design speed of 100km per hour. It is also the bridge with the widest span in the Indian broad-gauge network. The bridge will include a 14m-wide dual carriageway and a 1.2m-wide central verge.

In 2004, the bridge's design and construction were awarded to a Joint Venture of Afcons Infrastructure, Ultra Construction & Engineering Company of South Korea and VSL India.

Need for the Chenab Rail Bridge:

Traveling around Jammu and Kashmir's mountainous terrain has been a challenge for people living in the area. Therefore, the Government of India recognized it as an urgent need. Thus, constructing a national railway project connecting Jammu and Kashmir with the rest of India was proposed. Under this project comes the Chenab Bridge construction, connecting Udhampur near Jammu to Baramulla with almost half (six-and-a-half hours) the current time it takes.

After many discussions, keeping into account for strength, locally available material, aesthetic, economy, it was decided to have a large span single-arch bridge with approach viaducts on either side. The arch is two-ribbed, fabricated with large steel trusses.

These truss chords are sealed steel boxes that are internally stiffened & filled with concrete to control wind-induced forces on the bridge. Another advantage that comes with concrete filling is that there is no requirement for internal painting. 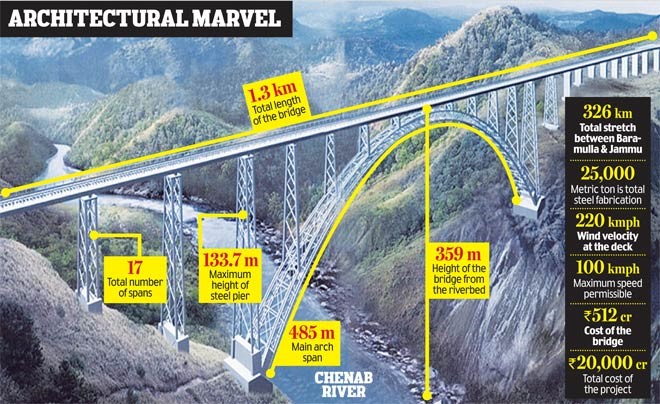 Key technical data of the bridge include:

The number of bearing has been minimized with continuous construction, particularly on the approach viaduct. It reduced inspection efforts & maintenance. Moreover, it also improved the riding quality.

Concrete piers are used for the viaduct, while piers are of steel near the arch. Such a major arch bridge design requires several additional considerations. Existing codes for design were found inadequate for this kind of large span. For instance, the Indian Railway Standards (IRS) is primarily for simply supported bridges with spans up to 100m (although used for higher spans up to 154m). But the spans for Chenab Bridge are continuous & also exceed this limit by a significant amount.

Key design considerations taken into account are listed below:

Since the bridge is located over a very deep canyon, wind effects will be very prominent for bridge stability. Therefore, the Norway-based Force technology Laboratory did several wind tunnel tests to understand the impact of wind speed, gust buffeting & static force coefficients. The bridge was designed to resist wind speeds of up to 260 km/ph from the given results. Beyond the safe limit, sensors will activate the signal & stop the train before plying the bridge.

The bridge is located in Seismic Zone IV & has been designed for Seismic Zone V. It is also the first bridge in India designed to resist contact blast loading.

The material used majorly consists of steel as it is more economical when large forces need to be resisted. Also, it can withstand a temperature of -20 Celsius & high wind speeds. As Jammu & Kashmir often witness terrorist attacks, hence the bridge is made with 63 mm thick special blast-proof steel to ensure safety. Similarly, concrete pillars can also withstand explosions.

The bridge being constructed on one of the most isolated & complicated terrains unfolds many challenges as the construction progresses. One of the major challenges was to build the bridge without obstructing the flow of the river.

To make the isolated terrain approachable, engineers made bridge roads of 5 km in length to reach the bridge's foundation. Before making the foundation, the preliminary step required was slope stabilization as there were such steep slopes. The inclination of slope varies from 43 to almost vertical, having an angle of 77 degrees. Performing slope stabilization on such a slope was also a challenging task. Slope stabilization measures were designed by the Indian Institute of Science Bangalore (IISc).

After slope stabilization, the foundation was cast. Since the piers are of great height, massive foundations of about 36.5mx50m were required. 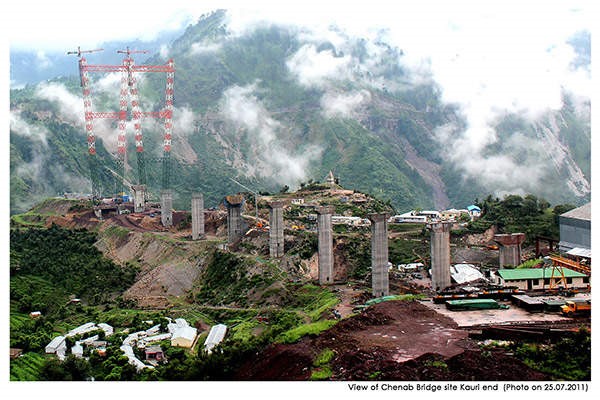 The erection scheme for the bridge was not such an easy task again. Two pylons of height around 137m & 100m were erected on either side of the river. Two auxiliary self-propelled 20t capacity cable cranes were used to tow temporary auxiliary ropes across these pylons. The partly finished arch parts were supported using these ropes. Basically, with cable cranes attached on both sides of the river, the main arch is erected. These cable cranes used are the largest in the world. 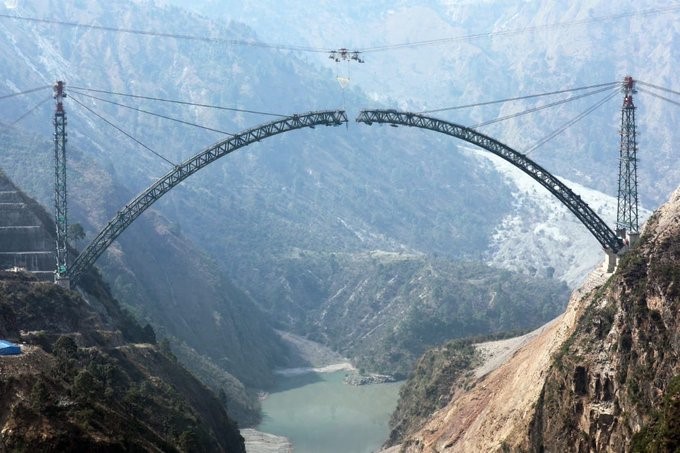 Once the arch completion takes place, trusses will be added & finally, the girder will be constructed on top as a horizontal platform. The bridge deck is partly curved & partly straight. Also, it is located on a transition curve that consists of changing radius. Hence, construction is done in stages considering changes in alignment.

Completion of the Engineering Marvel?

According to the latest update on March 14th, 2021, the bridge's bottom arch has finally been completed. The major challenge experienced while completing the bottom arch came from aerodynamic forces. Lifting operations were designed for wind speed of 15m/s, while all the other components like enabling permanent segments were designed for a much higher wind speed of 39m/s. If wind speed goes above respective limits, then operations were halted & resumed when it comes below the limits.

As the work for the bottom arch has been completed, now work for the top arch will start. Once the whole project is completed, India will get crowned with the world's tallest rail bridge. Let's hope it happens soon. 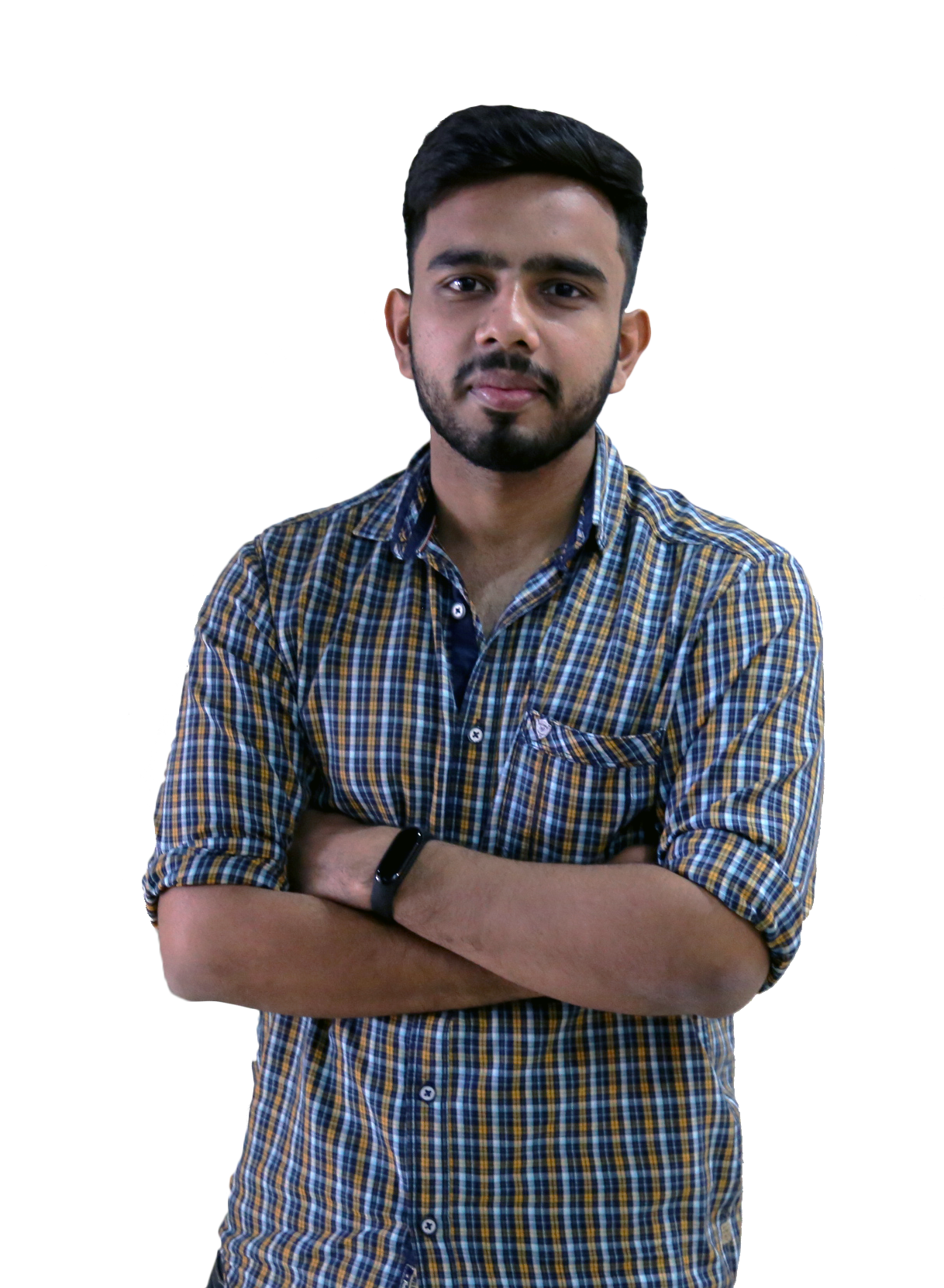