Incremental launching is a special construction method of building a bridge to overcome access problems or minimize disruption at ground level. Incremental launched prestressed concrete bridges are built in segments in a casting bed and the finished segments are pushed out of the casting bed to leave space for the construction of subsequent segments. Special knowledge and a high degree of temporary works integration are required in order to successfully design an incremental launch bridge. Most of the superstructure construction activities are carried out at the casting bed area. Bridge barriers, bridge lightings, and drainages can be installed prior to launching.

This technique is generally used for bridges spanning less than 60 meters and require a high degree of technology for both design and construction, and hence demand sophisticated structural analysis and design techniques when compared with other conventional bridges. There are two distinct stages to analyze, the launching stage and the in-service stage. Furthermore, there are also two distinctive groups of pre-stress to accommodate the actions from each of these stages.

Several aspects of temporary works need to be carefully modeled and designed when using the incremental launching method as a bridge construction methodology. Some of them are explained below.

A. Design of Launch Geometry


Launch geometry design is a key component of the incremental launching bridge design and it is therefore important to evaluate and verify the design of launch geometry.

To define a launch geometry, we need to determine the center of launch geometry, the radius of the launch geometry, bearing angle of the vertical radial section, and the inclination of the axis of rotation. These parameters can be calculated by using the coordinates and level of two abutments and the midpoints along with the road geometry. 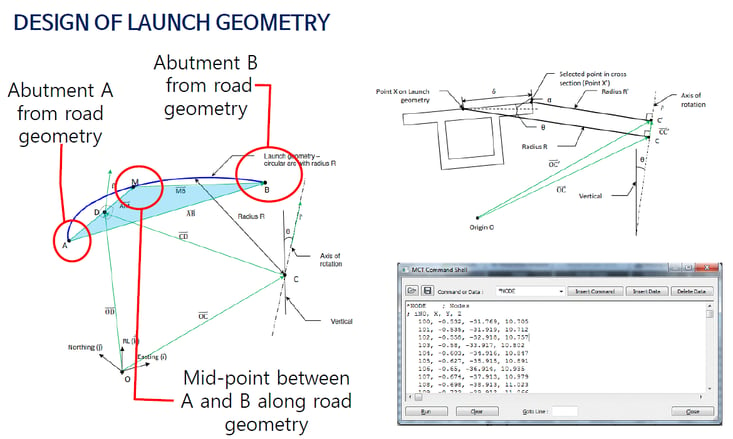 The shape of the bridge deck after launching can be considered as an extrusion of the radial cross-section about the axis of the rotation as shown in figure 2. The trajectory of each point of a cross-section after launching is also a circular arc. Each point of a cross-section has its own radius and center, and shares the same center of the axis of rotation. The coordinates and level of any point in a cross-section along the bridge can be calculated using this method. After that, the design launch geometry will be compared with the design road geometry to see how well the road geometry is approximated. The coordinates, level, cross fall, and bearing angle at supports are the parameters to be compared. If the approximation is not good enough then the designer may need to consider varying the web height or cantilever length to improve the approximation. 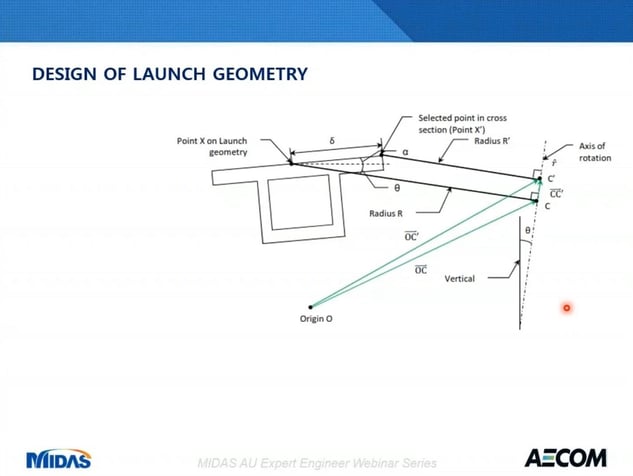 There are a number of temporary works that need to be incorporated in a launch bridge design which is shown in figure 3.

The casting bed is placed where the concrete segments are cast and where launching tendons are tensioned. It consists of a couple of spine beams on a rigid foundation and a steel outer form supported on a separate foundation which can be lowered for demoting. During launching, leading segments are cantilevered until they reach the next pier. The launch nose is attached in front of the first segment as shown in the figure to reduce the cantilever bending moment in the concrete segment. Usually, the length of the launching nose is about 70 percent of the maximum launching span. Therefore, the concrete box is dictated by the maximum launching span. The typical span length suitable for launching is between 30 to 60 meters. If the span is too long then the superstructure will become too deep and uneconomical to launch, in this case, temporary tower can be used to reduce the span length during launching. geometry design is a key component of incrementally launching bridge design and it is therefore important to evaluate and verify the design of launch geometry.

Launch jack and braking saddle are installed at the abutment (in front of the casting bed). They utilize the friction to move and stop the superstructure during launching. At the start or end of the launching stage, the available friction is not enough for launching and thereby a separate pulling system is required. For example, a pulling frame is attached to the end of the bridge for this purpose.

On top of piers and abutments side guides are attached at the top of the pier to provide the lateral restrain during the launching. Table form is to form the bottom face of the top flange and this form is launched together with a segment from the casting bed and this is pulled back to the casting bed after the bottom flange of the next segment is cast. Some contractors may prefer using the precast concrete panel as a permanent form so that table form is no longer required.

Table 1 summarizes the integration of temporary works to a midas Civil model. In the model, casting bed stiffness is represented by a series of vertical springs. Spring reaction is the load on the casting bed spine beams. Launching nose is modeled in midas as beam elements, typically a launching nose consists of a couple of parallel I beams. In order to not overcomplicate the midas model, these beams are modeled as a single combined beam. After the launching stage analysis, bending moment and shear force envelopes of the launch nose can be obtained from midas model. A temporary tower is modeled as a spring to account for its stiffness. Design actions of this tower are derived from spring reactions. Launch jack and braking saddle are not modeled. Available friction for launching is calculated using the launch abutment reaction.

There are a number of features in the cross-section of launched box girder with many functions.

In most cases, the box section is cast in two pours with a construction joint located at top of the webs as shown in figure 4. Very often the bottom surface of the top flange is formed by a table form which is launched together with the finished segment. It will ride back to the casting bed for the casting of the next segment. For this reason, a continuous path in the cross-section is required at the bottom flange. This means if the local thickening of the bottom flange at several joints is required to accommodate prestressing anchors and such thickening is required at the table form path and this thickening needs to be maintained over the entire length of the bridge. 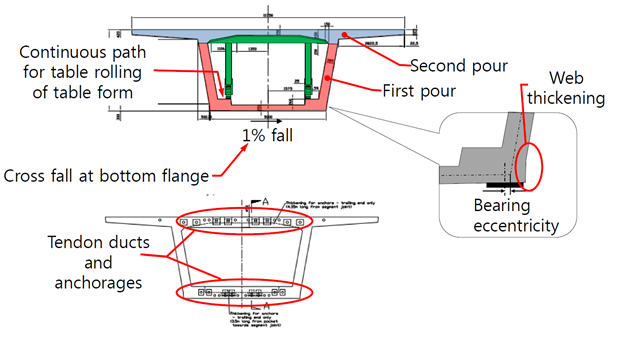 Also, if internal tendons are used for continuity prestress, blisters for prestressing anchorage need to miss the path of the table form. The soffit of the bottom flange is usually provided with a nominal cross fall of 1% to ensure the bridge superstructure always leans against one side during launching.

In a midas model, the cross-section is input as a PSC session by activating additional cross-section control points, the above-mentioned features can be captured in a Midas model.

The purposes of launching stage analysis are:

a. To ensure the stresses in the superstructure during launching comply with the appropriate requirements.

b. To evaluate the load during launching for the design of launching nose, temporary bearings,

c. To calculate the cumulative shortening of which deck due to pre-stressed creep and shrinkage

Below figure 5 shows the bending moment envelope of the bridge superstructure from midas analysis. 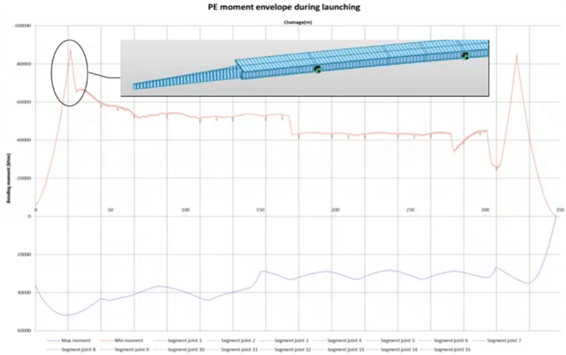 The sagging and hogging moment of intermediate spans is uniform. This is because each cross-section alternates between the midspan section and the support section. Figure 8 shows two distinctive magnitudes of the moment with the magnitude of the second part being lower. This means that the pier of the second half of this bridge is more closely spaced. 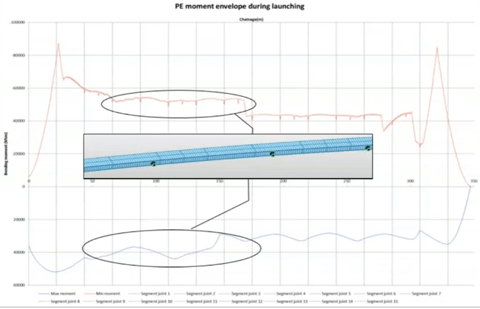 Another peak as shown in below figure 9 towards the trailing end of the bridge, this happens when the trailing end of the bridge leaves the casting bed and becomes a cantilever. There is one potential critical stage hidden inside this envelope. It happens when a segment is launched with some of the tendons in the flange stressed. Typically, tendons in flanges are two or three segments long. The tendons are staggered so that only half or a third of them are stressed at each launching stage. 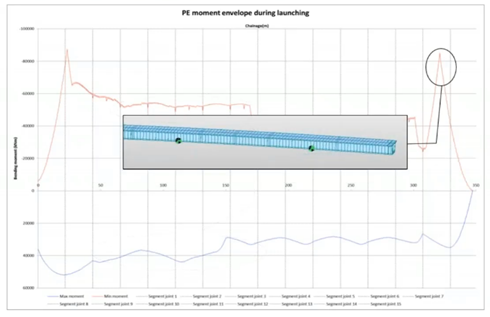 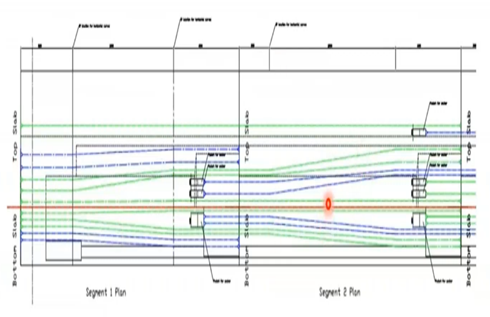 Table 2: Comparison of lapping and coupling 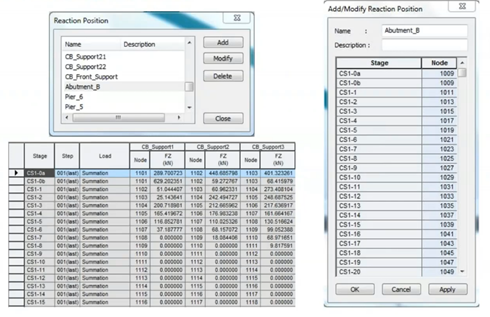 During launching concrete segments become shorter due to elastic shortening at the transfer of pre-stress and subsequent creep and shrinkage. If uncorrected, then the diaphragm of the superstructure will not align with piers and abutments, as a result, the cumulative shortening of segments obtained from launch stage analysis needs to be compensated during casting. Such information can be easily obtained from Midas.

After the launching stage analysis, In-service stage analysis is carried out to evaluate the transient effect as well as the load during bearing replacement. SM 1600 live loads are predefined in Midas for influence line analysis. If the box girder section is defined as a PSC section, then the temperature profile for differential temperature can be defined directly as beam section temperature loading.

To design a pre-stressed concrete bridge, we typically need to know the moment envelope shear envelope and torsion envelope and the coexisting effects. Design envelopes and coexisting actions can be conveniently obtained from Midas.

Below checks need to be performed as per AS5100:

Furthermore, AS5100 part to clause 7.11 does not allow sag deflection under permanent loads.

Therefore, the effect of net sag deflections should be assessed with respect to:

He is an Associate Director – Bridge Structures in AECOM Melbourne Office with 16 years of design experience. He has extensive experience of designing complex  bridges with challenging requirements.

He designed bridges on a number of major infrastructure projects in Hong Kong and several States in Australia. 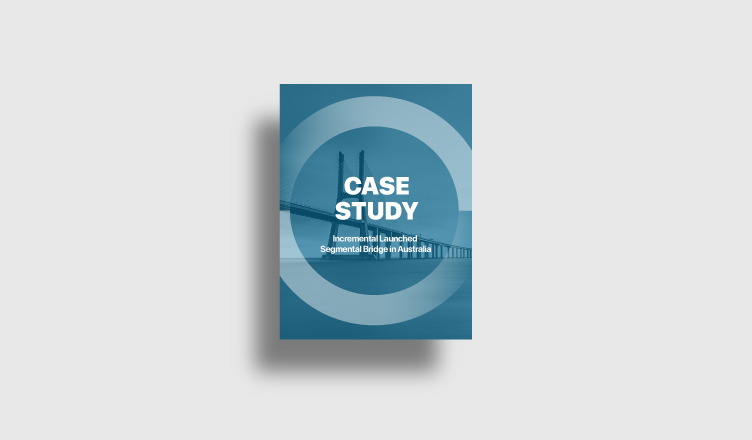 Case Study Dynamic Analysis of Footbridges as per Eurocode