Top 5 Most Incredible Bridges in the World

The Danyang-Kunshan bridge in China is considered the world’s longest bridge with a length of 164.8 kilometers. The bridge connects two very large cities in China, Shanghai and Nanging. The Danyang-Kushan bridge also connects Danyang and Kunshan in the section of the Beijing-Shanghai High-Speed Railway that connects the Beijing West Station and Shanghai Hongqiao Station. During its construction, it took almost 10,000 construction workers to complete this engineering feat, which made the completion of the construction possible in only 4 years. One notable part of the Danyang-Kunshan bridge is its 9km long section that spans over Yangcheng Lake. This particular section required at least 2,000 pillars to support it. This massive structure required 450,000 tons of structural steel, making it a very sturdy structure. The sturdiness of the bridge allows it to withstand massive natural disasters such as typhoons and earthquakes of magnitudes reaching 8 on the Richter scale. Furthermore, the bridge is also able to withstand the impacts from naval vessels that weigh up to 300,000 tons. Furthermore, since the bridge had to function for a high-speed train, the design speed was an important factor to take into consideration. Depending on the type of train, the maximum speed of the railways varies from 250km/h to 350km/h. However, for the Danyang-Kushan bridge, the railway line of the bridge had to be designed for an operating speed of 350km/h and a maximum speed of 380 km/h due to its busy hours. 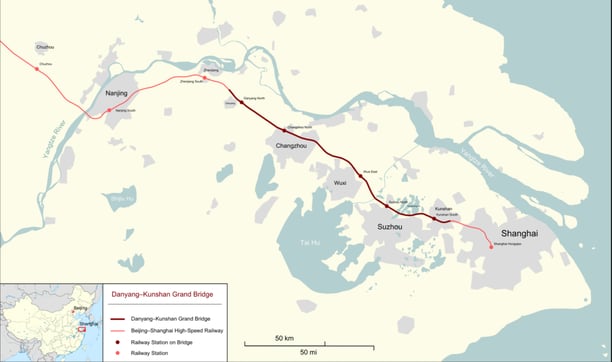 China Road and Bridge Corporation (CRBC), the company behind the design of the world’s longest bridge, is considered one of the largest engineering and construction firms in the world. With almost 60 offices globally around Asia, Africa, Europe, and America, CRBC has shown its global competence mostly in engineering and construction of transportation infrastructure (bridges, highways, tunnels, ports, etc). Just like the Danyang-Kushan bridge, most of CRBC’s projects have achieved various records and awards. For example, the Suramadu Bridge is considered the longest bridge in Indonesia and the first bridge to ever cross the Madura Strait. Another outstanding project includes the Sutong Yangtze River Bridge in China, which is considered one of the tallest bridges in the world, and also received the Outstanding Civil Engineering Achievement from the American Society of Civil Engineers in 2010.

The Millau Viaduct in France is considered, as of September 2020, the tallest bridge in the world with, a height that surpasses even the Eiffel Tower. It is a multi-span cable-stayed bridge that crosses the Gorge valley of the river Tarn. The viaduct is composed of 127,000 cubic meters of concrete and 26,200 tons of reinforcing steel. Furthermore, 5,000 tons of pre-stressed steel are used for the cables and shrouds. One of the major structural demands regarding the design of the bridge was to balance the unsymmetrical live loads in the different spans of the bridge. Furthermore, due to its immense height, it was subjected to high bending moments, so the piers had to be designed as wide and strong as the box sections. The bridge has so far helped with congestion of traffic because it has shortened the travel time between Clermont-Ferrand and Beziers. 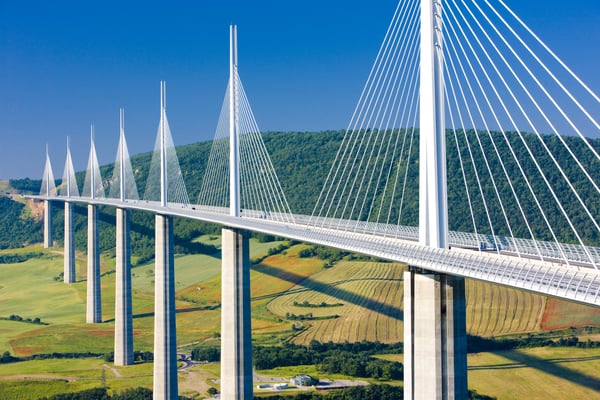 Eiffage, a French civil engineering company and the fifth largest in all Europe, is responsible for building the tallest bridge in the world. The company works in several sectors including construction, infrastructure, energy systems, concessions, etc. Furthermore, the company is very committed to tackling the challenges of climate change by providing a range of projects that focus on sustainability. For example, the Hyperion Wooden tower in France is considered the first wooden residential building in the country with almost 1,400 solid wood. This volume of sustainable wood reduces carbon emissions by 25% and will save almost 15 tons of carbon emissions over an entire building life cycle!

The Akashi Kaikyo Bridge in Japan is considered one of the longest and tallest suspension bridges in the world. The suspension bridge is 3,911 meters long and the supporting towers stand approximately 298 meters above the ground. The pylons, designed as steel truss structures, accommodate the cable saddles and support most of the load of the half-bridge. Furthermore, the distance between the pylons for suspension bridges is evaluated with a distance of 1991m. The bridge design has a two-hinged truss structure stiffening girder system, which allows the bridge structure to withstand earthquake magnitudes up to 8.5 on the Richter scale, winds up to 286 kph in speed, and extreme sea currents. One innovative engineering technology used in this particular bridge was the 20 tuned mass dampers (TMDs) used in each of the towers. These TMDs helped the bridge cancel out the wind sway. For example, when the wind impacted the bridge in one direction, the TMDs would sway in the opposite direction, canceling out the wind sway and ultimately balancing the bridge. Last but not least, the Akashi Kaikyo Bridge is also known as the “Pearl Bridge”. Wonder why? At night, 28 different patterns and colors of light illuminate the bridge, bringing the appearance of beautiful pearls. 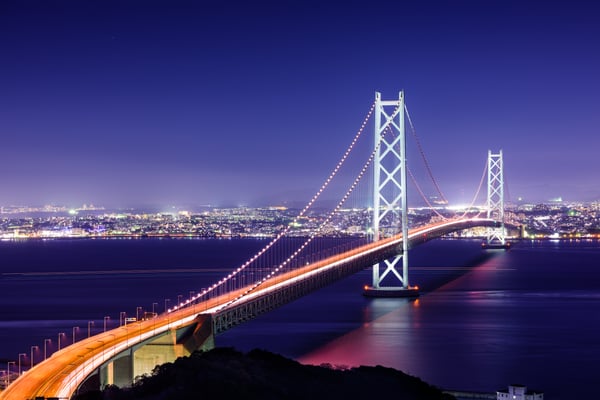 The design and engineering of the Akashi Kaikyo Bridge were led by a famous Japanese civil engineer called Satoshi Kashima. Dr. Satoshi Kashima earned his degree in civil engineering from the University of Texas at Austin and is considered an expert in bridge engineering. Dr. Kashima has been involved in the design and engineering of various bridges including long-span bridges, cable-stayed bridges, and truss bridges. His most notable project is Japan’s longest bridge, the Akashi Kaikyo Bridge, which he received the Japan Society of Civil Engineers Award. Currently, he is the executive director of the Japan Bridge Engineering Center and has been working in providing inspection and diagnosis of Japan’s national road bridges ever since.

The Incheon Bridge in South Korea is a 13km toll bridge composed of a center cable-stayed bridge section, approach bridge sections, and viaducts. The cable-stayed bridge portion is considered the longest cable-stayed bridge in Korea and #10 in the world with a center main span of 800m. The main purpose of the bridge is to provide direct access between Songdo and Incheon International Airport. The design and structural analysis of the bridge was performed using Midas Civil, a powerful engineering software. Therefore, the structure itself is able to withstand storms with 72 mps wind and earthquakes with magnitudes reaching a 7.0 on the Richter Scale. The bridge is also located near the Port of Incheon, so the space underneath the bridge was designed as U-shaped with a clearance height of 80m, allowing ships to cross safely between the main two towers. Furthermore, the piles underneath the Incheon Bridge can withstand loads up to 6,000 tons, making it the most stable bridge in the world. Lastly, most of the structural components of the bridge were manufactured in a controlled, automated environment. Full Span Launching Method (FSLM) was used for the cable-stayed bridge section and the Free Cantilever Method (FCM) was used for the approach bridge sections. This shortened the construction period of the bridge by at least 8 months. 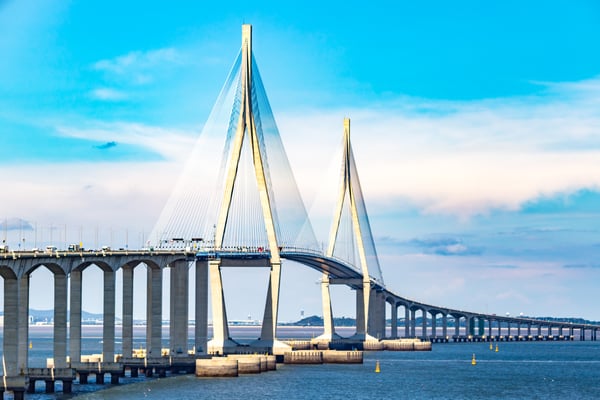 Samsung C&T currently has four different industries: Construction, Trading, Fashion, and Resort. Today, we will be talking about the Engineering and Construction Group, which is considered a global construction and engineering company, and currently holding No.1 in South Korea. Samsung C&T focuses on various construction sectors including building projects, civil infrastructure, power plants, and even residential housing. Most civil engineers and architects will know most of the iconic projects by Samsung C&T due to the various engineering and design challenges each project was able to accomplish. For example, the Burj Khalifa in Dubai is considered the highest skyscraper in the world, and at the time of construction, it was one of the most impressive engineering and construction projects in the whole world. Other projects include the Incheon International Airport, which was considered the cleanest and most appealing airport in the world. People at Samsung C&T consider themselves “Dream Creators” because they make the dreams of engineers and designers become a reality.

The Russky Island Bridge is considered the longest cable-stayed bridge in the world with a total length spanning 3,100 meters. The distance between the towers is 1104 meters. There were many challenges concerning the design of the bridge because it was located in an area with extreme weather conditions. For example, the weather in Vladivostok goes from -40 degrees to 40 degrees Celsius. In order to cope with these challenges, careful considerations were made for the design. Midas Civil software was used for careful structural analysis of unknown load factors for cable optimization and moving load analysis for the different loads affecting the bridge. For the cable-stayed system, an advanced system, called the compact PSS system, was implemented. This system allowed for a compact design of cable stays that employed sheaths with smaller diameters which ultimately helped reduce the wind loads applied to the bridge structure. Furthermore, in order to counter the extreme temperature challenges, protective sheaths made out of high-density polyethylene (HPDE) covered the cable stays of the cable-stayed system of the bridge. 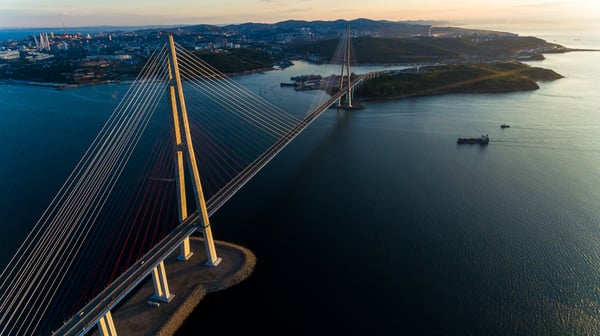 About companies | SK Most Construction Company and Freyssinet

SK MOST Construction Company is considered one of the leading construction companies in Russia. The company specializes in building and repairing transportation infrastructure, including bridges, railroads, tunnels, and more. Most of the construction was carried out by SK Most, but the key component of the bridge, the cable stays, were designed and installed by a global French company with renowned expertise in long-span cable-stayed bridges known as Freyssinet. With its unparalleled knowledge in cable-staying technology, Freyssinet was able to overcome the extreme environmental challenges of the construction site. For example, for the Russky Island Bridge, Freyssinet used its patented compact cable stays in order to reduce the wind loadings on the bridge. 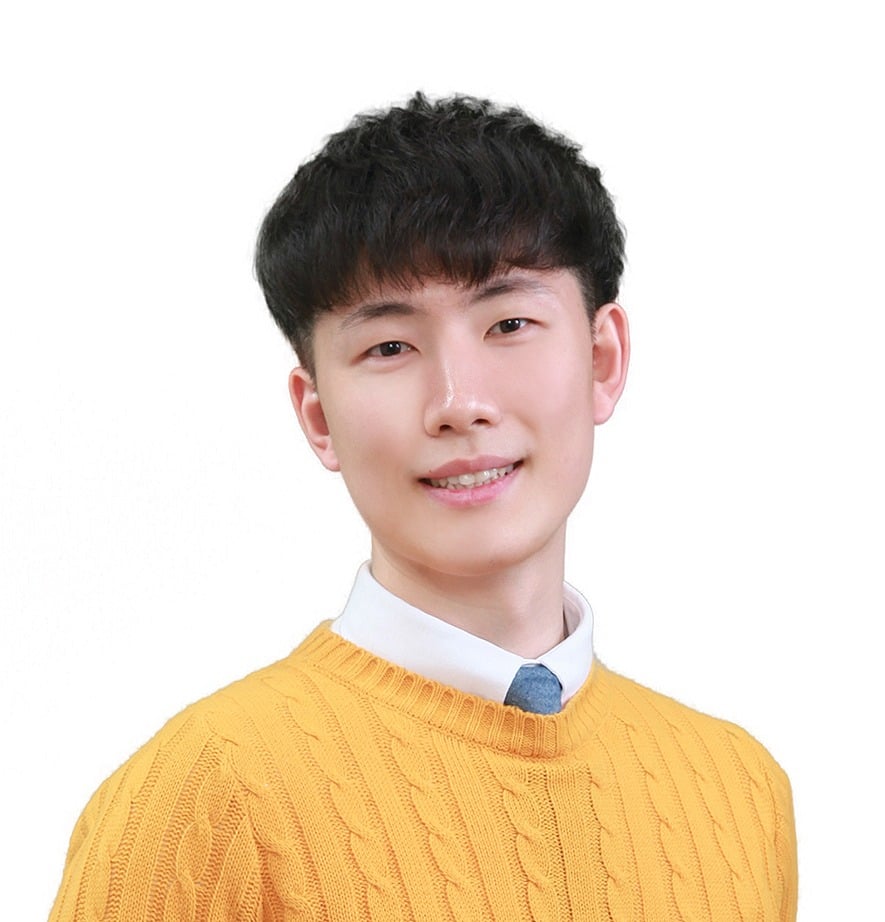 Has multiple years of experience consulting structural, civil engineers around the world. Provides the best possible lectures and workshops to help engineers learn how to accomplish project with midas Civil in the fastest and easiest way.